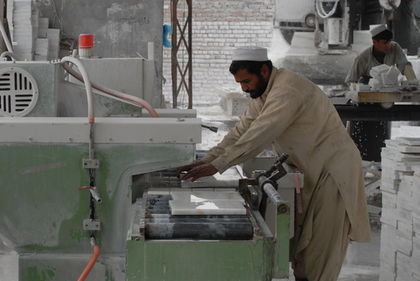 As with other sectors of the economy, Afghanistan's already beleaguered industries have been devastated by over two decades of civil strife and war that left most of the countries factories and even much of the cottage industry sector inoperative. Still in an early stage of growth before the outbreak of war, industry's development has been stunted since; those few industries that have continued production remain limited to processing of local materials. The principal modern industry is cotton textile production, with factories at Pol e Khomri, Golbahar, Begram, Balkh, and Jabal as Saraj, just north of Charikar. Important industries in 2000 included textiles, soap, furniture, shoes, fertilizer, cement, handwoven carpets, natural gas, coal, and copper.

Carpet making is the most important handicraft industry, but it has suffered with the flight of rug makers during the civil war and since the 2001 US-led bombing campaign. Carpet-making is centered around the north and northwest regions of the country. Afghan carpets are made of pure wool and are hand-knotted, and much of the work is done by women. Production has fluctuated widely from year to year, increasing somewhat during the early 1990s with the establishment of selected "zones of tranquility" targeted for UN reconstruction assistance. Other handicrafts include feltmaking and the weaving of cotton, woolen, and silk cloth. Wood and stone carving have been concentrated in the northeastern provinces, while jewelrymaking has been done in the Kabul area. The making of leather goods has also been a handicraft industry.

thanks sooo much! your website is a life saver!! like all the other websites are packed with info that u dont need~ and you get all confused are overloaded!
3
maria

im writing a report of afghanistan for social studies and this really helps thanks and i wish i could see what afghanistan is like i saw these beautiful buildings in books about afghanistan and i really want to see what they look like insede well i have to go bye and thanks agin :)
4
Brad

It would be awesome to see some detailed statistics. I haven't been able to find much online. Are they simply hard to find, or is Afghanistan's industry so miniscule that statistics aren't relevant?
5
Haris Siraj

i would like to have list of company so we can trade or start business with them,
as well as promote there product and get advantage of it.