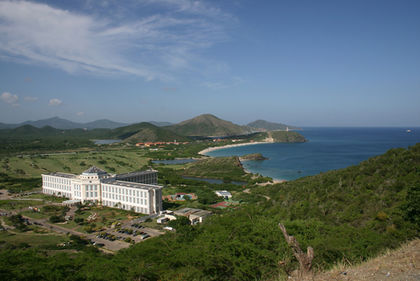 No participant in the drama of Venezuelan history is as well known, both nationally and internationally, as the great Liberator of the South American revolution, Simón Bolívar (1783–1830). Renowned for his military genius and his ability to lead and to inspire, Bolívar also wrote brilliantly and prophetically on government and international politics. Among the greatest Venezuelan literary figures was Andrés Bello (1781–1864), outstanding in journalism, history, law, literary criticism, philology, and philosophy. Francisco de Miranda (1750–1816) is credited with bringing the first printing press to Venezuela and publishing the first newspaper, La Gaceta de Caracas; he was also an adventurer who, for a three-month period in 1812, held dictatorial powers in Venezuela. For most of the period since independence was achieved, a series of dictators held power, including Antonio Guzmán Blanco (1829–99), Cipriano Castro (1858?–1924), Juan Vicente Gómez (1857?–1935), and Marcos Pérez Jiménez (b.1914). Rómulo Betancourt (1908–81) was a leading political leader in the decades after World War II.

Simón Rodríguez (1771–1854), called the "American Rousseau," was the leading liberal scholar of the prerevolutionary period. Other writers of note were Rafael María Baralt (1810–60) and Juan Vicente González (1811–66), known as the father of Venezuelan national literature. Fermín Toro (1807–74) introduced the Indianist movement into Venezuelan romantic poetry. José Antonio Calcaño (1827–97) was referred to as "the Nightingale" for the flowing beauty of his verse. A noted poet and educator was Cecilio Acosta (1831–81), who was also Venezuela's first corresponding member of the Spanish Royal Academy and the author of the Venezuelan penal code. Juan Antonio Pérez Bonalde (1846–92) is considered Venezuela's greatest romantic novelist of the 19th century. The outstanding writers of the later 19th century were Manuel Díaz Rodríguez (1868–1927) and Manuel Fombona Palacio (1857–1903). The most famous contemporary writer, Rómulo Gallegos (1884–1969), gained world renown almost overnight with the publication of his Doña Bárbara in 1929. Other prominent contemporary writers include the poet, novelist, and playwright Mariano Picón Salas (1901–65); the novelist Ramón Díaz Sánchez (1903–68); the economist, historian, and novelist Arturo Uslar-Pietri (1906–2001); and the poet Juan Liscano (1915–2001).

The first painter of note in Venezuela was Juan Llovera (1785–1840). His son Pedro Llovera (fl.19th cent.) became the teacher of the first generation of 19th-century Venezuelan painters.

The outstanding pioneer of Venezuelan science was José María Vargas (1786–1854). The first university courses in mathematics and physics were introduced by Vargas's contemporary Juan Manuel Cajigal (1802–56). Modern scientists include Gaspar Marcano (1850–1910), famous for his investigations of blood; Luis Razetti (1862–1932), biologist and physician; and Arnoldo Gabaldón (b.1909), director of an antimalaria campaign from 1945 to 1948.

i think you should add nothin! it looks fine! gosh!
2
Shankedra

i like it very much,it really gave me alot of information,and i;m going to use it
3
no one

no one posts so i will. this is great posts. i will soon extract this info and put it in my own words and own prespective of what i think, thanks for ideas. dint waste much time looking for some sort of answer. Thanks... i have less work to do
4
your mom

nice post. i think its useful. i guess i'll just reword it and use it as my own... and again... you should really label artist from military people. its will help future people who need this.
5
some kid

Carolina Herrera is a very famous Venezuelan designer. I think she should be added.