Venezuela has enjoyed an enviable balance-of-payments position for many years. Although the country was forced to import goods to satisfy the demand for many industrial, construction, and household items, its income from exports has more than equaled its expenditures for imports. Venezuela experienced foreign exchange problems throughout the 1990s, largely because of the fluctuation of world oil prices. Venezuela's balance of payments position deteriorated from its strong performance of 1991. In 1992, the merchandise trade surplus fell to $1.6 billion, a drop of 66% from 1991, primarily due to the economic recovery program and a decline in exports. The current account balance rose from–3.7% of GDP in 1993 to an estimated 11.5% in 1996, but fell by 2.8% in 1998.

As of 2003, private consumption as a share of GDP had risen, and the shares of gross fixed investment and exports of goods and services fell. Venezuela's dependence upon oil exports continues to make it vulnerable to the vagaries of the international economy.

The US Central Intelligence Agency (CIA) reports that in 2001 the purchasing power parity of Venezuela's exports was $29.5 billion while imports totaled $18.4 billion resulting in a trade surplus of $11.1 billion.

The International Monetary Fund (IMF) reports that in 2001 Venezuela had exports of goods totaling $26.7 billion and imports totaling $17.4 billion. The services credit totaled $1.28 billion and debit $4.61 billion. The following table summarizes Venezuela's balance of payments as reported by the IMF for 2001 in millions of US dollars. 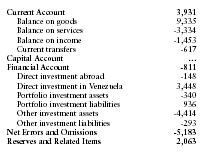