During the 16th century, only a few Spanish expeditions landed on the Banda Oriental, or east bank of the Uruguay River. Most of them were driven off by the native Charrúa Amerindians. Jesuit and Franciscan missionaries landed in 1624, and formed permanent settlements. By 1680, Portuguese from Brazil had founded Colonia do Sacramento as a rival to Buenos Aires, on the opposite bank of the estuary. Thereafter, the area was a focal point for Spanish-Portuguese rivalry.

Montevideo was founded in 1726, and Uruguay became part of the viceroyalty of La Plata, which the Spaniards established in Buenos Aires in 1776. During the Napoleonic Wars, the British invaded the region of La Plata and captured Buenos Aires and Montevideo (1806–7), but they were forced out in 1807. After 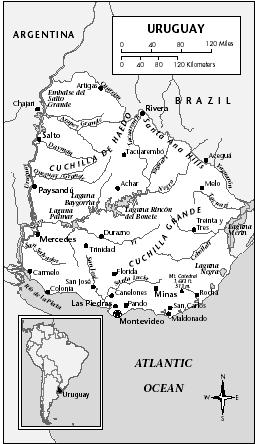 Buenos Aires refused to give Uruguay autonomy, the Uruguayan national hero, José Gervasio Artigas, declared Uruguay independent in 1815. A year later, Brazilians attacked Montevideo from the north, but Artigas led a revolutionary movement against them. The struggle continued from 1816 to 1820, when the Portuguese captured Montevideo and Artigas had to flee to Paraguay. Uruguay was annexed to Brazil in 1821 and was known as the Cisplatine Province.

On 25 August 1825, Juan Antonio Lavalleja, at the head of a group of patriots called the "treinta y tres orientales" ("33 Easterners"), issued a declaration of independence. After a three-year fight, a peace treaty signed on 28 August 1828 guaranteed Uruguay's independence. Disappointed in his hopes for the presidency, Lavalleja launched a series of rebellions. During this period of political turmoil and civil war, the two political parties around which Uruguayan history has traditionally revolved, the Colorados (reds) and the Blancos (whites), were founded. Uruguay's first president, Gen. José Fructuoso Rivera, an ally of Artigas, founded the Colorados. The second president, Brig. Gen. Manuel Oribe, a friend of Lavalleja, founded the Blancos.

The 19th century was largely a struggle between the two factions. Some measure of national unity was achieved in the 1860s. In 1865, Uruguay allied with Brazil and Argentina to defeat Paraguay in the Paraguayan War (1865–70), also known as the War of the Triple Alliance and the Triguarantine War. However, it was not until the election of José Batlle y Ordóñez as president in 1903 that Uruguay matured as a nation.

The Batlle administrations (1903–7, 1911–15) marked the period of greatest progress. A distinguished statesman, Batlle initiated the social welfare system codified in the Uruguayan constitution. From then on, Uruguay's social programs, funded primarily by earnings of beef and wool in foreign markets, gave Uruguay the sobriquet "Switzerland of South America."

After World War II, the Colorados ruled, except for an eight-year period from 1958–66. It was during the administration of President Jorge Pacheco Areco (1967–72) that Uruguay entered a political and social crisis. As wool declined in world markets, export earnings no longer kept pace with the need for greater social expenditures. Political instability resulted, most dramatically in the emergence of Uruguay's National Liberation Movement, popularly known as the Tupamaros. This well-organized urban guerrilla movement mounted a campaign of kidnapping, assassination, and bank robbery while espousing Marxist and nationalist ideals.

In November 1971, Colorado candidate Juan María Bordaberry Arocena was elected president, and the Colorados retained control of the Senate and Chamber of Deputies. After Bordaberry assumed office in March 1972, the Tupamaros ended a temporary truce and returned to the offensive. Their activities, coupled with the worsening economic situation, exacerbated Uruguay's political uncertainty. Gradually, the military assumed a greater role in government, and by 1973 was in control of the system. By the end of 1973, the Tupamaros had been crushed.

Military officers were named in 1974 to head all state-run enterprises, including the Central Bank. The 1966 constitution was suspended and political activity was banned. Military leaders ousted Bordaberry from the presidency in 1976, because of his refusal to restore constitutional rule, and they named a new president, Aparicio Méndez Manfredini. The OAS and other international organizations denounced Uruguay for human rights violations; in 1979, Amnesty International estimated the number of political prisoners at 6,000. In mid-1981, the military government began to negotiate with leaders of the traditional parties, and in September 1981, a "transitional" president, Georgio Álvarez Armellino, was installed.

One of the first acts of the new government was to release all political prisoners. Another was to declare amnesty for former military and police leaders accused of human rights violations. In an attempt to reconcile warring factions, the government initiated a "social dialogue" with employers and union leaders to reduce social tension. However, slow progress on the economic front led to the 1989 election of the Blanco candidate, Luis Alberto Lacalle.

Lacalle engaged in an ambitious attempt to liberalize the Uruguayan economy. He emphasized deficit reduction, reforms in education, labor, and the civil service, as well as the privatization of state enterprises. However, these plans were dealt a serious blow in 1993, when a plebiscite failed to ratify a set of proposals for liberalization. In November 1994, Sanguinetti was returned to office in the closest elections ever recorded in Uruguay's history. The three-way race between the Colorado, Blanco, and Broad Front (a leftist coalition) parties ended in just a slight majority for Sanguinetti and the Colorados. Both the Blanco and Broad Front candidates were only a few votes behind. It was the first time the Broad Front party had come within reach of the presidency. The Broad Front also gained the municipal government of Montevideo, Uruguay's capital, in 1989 and again in 1994. In the 1990s, the left had discarded revolutionary rhetoric and become more moderate and more appealing to centrist voters. At the same time, many Uruguayans had grown more critical of the traditional parties.

Sanguinetti himself immediately embarked on a program of economic reforms, including a long-range plan for cutting back on Uruguay's historically generous social programs and benefits, including 20 days of vacation after a year of work, paid maternity leave, and a generous retirement package. As a member of MERCOSUR (Mercado Comun del Sur—Southern Cone Common Market), Uruguay faced growing pressure to liberalize its economy during the 1990s, as economic giants, and MERCOSUR partners Brazil and Argentina had done. Yet voters had twice rejected privatization of state-owned companies, some of which were profitable and often even competitive. The economy also had done well, with the GDP averaging 4.2% growth between 1992–98.

By 1999, the country's economic picture had changed. The troubled Argentinean and Brazilian economies affected Uruguay, where the economy contracted by 2%. Instead of panicking and clamoring for a cut in social benefits and privatization of state industries, presidential candidates from the right and left called for a cautious approach to economic reforms as they neared the October 1999 elections. Tabaré Ramon Vazquez, the former socialist mayor of Montevideo and candidate representing the Broad Front, finished first in the presidential election, with 39% of the vote. He had appealed for caution, gaining the largest number of votes for a leftist coalition in the country's history. But Vazquez failed to gain a 51% majority, forcing a presidential runoff. The Colorado candidate, Jorge Batlle Ibáñez, had unsuccessfully run for the presidency four times and finished second with 31% in the October election. The Blanco candidate, Luis Lacalle, had finished third with 21.5%.

The 72-year-old Batlle, whose great-uncle had built the country's social programs, was not about to dismantle them. He positioned his party as a moderate alternative to Vazquez's leftist coalition. But ultimately, he persevered at the polls by aligning the Colorados with their historic foes: the Blancos. The Blancos aligned themselves with Batlle in exchange for political concessions, and ministerial posts. In the November runoff election, Batlle gained 54.1% of the vote to Vazquez's 45.9%. Batlle was inaugurated in March 2000 and named five Blancos to his cabinet. The Blancos and the Colorados also held a slim majority in the Senate, with 17 of 31 seats, and a majority in the lower house, with 54 of 99 seats.

Faced with a shrinking economy, Batlle has also faced the economic and political crisis in Argentina, Uruguay closest and most important ally. The economy suffered a recession in 2001 and barely grew in 2002. Though unemployment has remained high in recent years, less than 10% of the population lives in poverty. Yet, Batlle has been unsuccessful in adopting a strategy that can generate sustained economic growth and restore dynamism to his country's economy. New elections are scheduled for late 2004 and the economic crisis has given the Broad Front an early lead in the polls.

My wife and I spent a week vacation in Uruguay in November 1979.We stayed at the Victora Hotel during the day took tours through the country.We visited the tomb of the unknown soldier and I met the Presidnt Mister Aparicio Mendez Manfredini. We enjoyed the trip and fell in love with the old classic American cars that were still in mint condition and still being used for transporation by the people. They would be worth millions here in the States today.It was a worthwild trip and I wish the people of Uruguay the very best. Jack Drew
2
eli

Who is the author of this piece? I would love to use this as a source for a larger essay, but need a reference...
5
kitty

I had a report on uruguy and it helped alot. it is a big report with all the details and histiry of uruguay