Under the Budget and Accounting Act of 1921, the president is responsible for preparing the federal government budget. In fact, the budget is prepared by the Office of Management and Budget (established in 1970), based on requests from the heads of all federal departments and agencies and advice from the Board of Governors of the Federal Reserve System, the Council of Economic Advisers, and the Treasury Department. The president submits a budget message to Congress in January. Under the Congressional Budget Act of 1974, the Congress establishes, by concurrent resolution, targets for overall expenditures and broad functional categories, as well as targets for revenues, the budget deficit, and the public debt. The Congressional Budget Office monitors the actions of Congress on individual appropriations bills with reference to those targets. The president exercises fiscal control over executive agencies, which issue periodic reports subject to presidential perusal. Congress exercises control through the comptroller general, head of the General Accounting Office, who sees to it that all funds have been spent and accounted for according to legislative intent. The fiscal year runs from 1 October to 30 September.

The public debt, subject to a statutory debt limit, rose from $43 billion in 1939/40 to more than $3.3 trillion in 1993. In fiscal year 1991/92, the federal deficit reached $290 million, a record high. Pressured by Congressional Republicans, President Clinton introduced a taxing and spending plan to reduce the rate of growth of the federal deficit when he began his term in 1993. The Clinton Administration calculated the package of tax increases and spending would cut the deficit by $500 billion over a four year period; in fiscal year 1997/98, the budget experienced an estimated surplus of $69 billion. However, the tax cuts and extensive military spending of President George W. Bush in the first term of the new millenium erased the surplus and pushed the economy toward a record $455 billion deficit projected for the 2003 fiscal year ($475 billion projected for 2004). The total public debt as of 15 August 2003 was $6,770,542,657,467.

The table below gives estimated federal government receipts and expenditures in millions of dollars for 2003 as reported by the US Office of Management and Budget. In the table, the term off-budget refers to receipts and outlays that are excluded from budget totals and are not subject to Congressional budget control mechanisms, such as oversight and review. Social Security is the federally-owned entity that receives the highest level of off-budget protection. 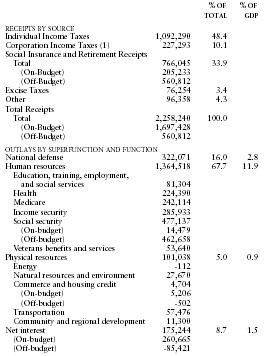 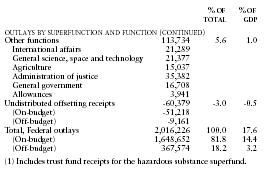