All major electric communications systems are privately owned but regulated by the Federal Communications Commission. The United States uses wire and radio services for communications more extensively than any other country in the world. In 2000 over 98% of all US households had telephones, utilizing some 194 million main telephone lines (as of 1997). In 1998, there were 69 million cellular phones in use.

Radio serves a variety of purposes other than broadcasting. It is widely used by ships and aircraft for safety; it has become an important tool in the movement of buses, trucks, and taxicabs. Forest conservators, fire departments, and the police operate with radio as a necessary aid; it is used in logging operations, surveying, construction work, and dispatching of repair crews. In 1999, broadcasting stations on the air comprised over 10,000 radio stations (both AM and FM) and more than 1,500 television stations. Nearly 1,000 stations were affiliated with the five major networks. As of 1997 the United States had some 9,000 cable television systems. In 2000 there were 2,118 radios and 854 televisions for every 1,000 people. In 2000, there were about 585 personal computers in use for every 1,000 people. By 2001, about 7,800 Internet service providers were serving 166 million subscribers nationwide.

The Post Office Department of the United States was replaced on 1 July 1971 by the US Postal Service, a financially autonomous federal agency. In addition to mail delivery, the Postal Service provides registered, certified, insured, express and COD mail service, issues money orders, and operates a postal savings system. Since the 1970s, numerous privately owned overnight mail and package delivery services have been established. 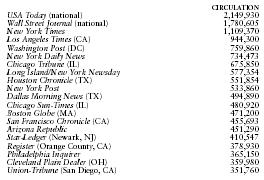 Modern Maturity, published bimonthly by AARP, had a circulation of 20 million in 2000. The two general circulation magazines that appealed to the largest audiences were Reader's Digest (about 17 million), and TV Guide (about 15 million). Time and Newsweek were the leading news magazines, with a weekly circulation of 4,630,140 and 3,100,000 respectively.

The US book-publishing industry consists of the major book companies (mainly in the New York metro area), nonprofit university presses distributed throughout the United States, and numerous small publishing firms. In 1994, 51,863 book titles were published in the United States.

The US Constitution provides for freedom of speech and of the press in its Bill of Rights, and the government supports these rights. Citizens enjoy a wide range of opinions in all media, where debate, editorial opinion, and government opposition viewpoints are represented in some form or another. Nearly all media are privately owned.