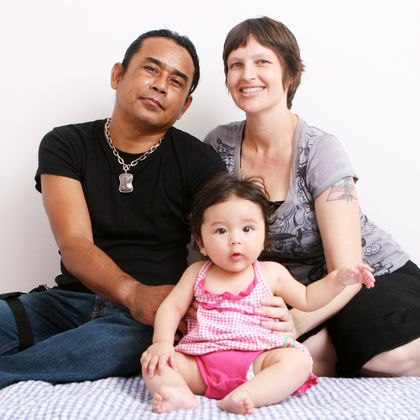 The majority of the population of the United States is of European origin, with the largest groups having primary ancestry traceable to the United Kingdom, Germany, and Ireland; many Americans report multiple ancestries. Major racial and national minority groups include blacks (either of US, African, or Caribbean parentage), Chinese, Filipinos, Japanese, Mexicans, and other Spanish-speaking peoples of the Americas. According to the 2000 Census, it was estimated that whites comprised 75.1% of the US population; Hispanics, 12.5%; blacks or African Americans, 12.3%; Asians and Pacific Islanders, 3.7%; and Native Americans (Amerindians—more commonly known as Indians, Eskimos, and Aleuts), 0.9%. Inequality in social and economic opportunities for ethnic minorities became a key public issue in the post–World War II period.

Some Native American societies survived warfare with land-hungry white settlers and retained their tribal cultures. Their survival, however, has been on the fringes of North American society, especially as a result of the implementation of a national policy of resettling Native American tribes on reservations. In 1890, according to the official census count, there were 248,253 Native Americans; in 1940, 333,909; and in 2000, 2,475,956 (including also Eskimos and Aleuts). Groups of Native Americans are found most numerously in the southwestern states of Oklahoma, Arizona, New Mexico, and California. The 1960s and 1970s saw successful court fights by Native Americans in Alaska, Maine, South Dakota, and other states to regain tribal lands or to receive cash settlements for lands taken from them in violation of treaties during the 1800s.

The black population in 2000 was estimated at 34,658,190, with the majority still residing in the South, the region that absorbed most of the slaves brought from Africa in the 18th and 19th centuries. Two important regional migrations of blacks have taken place: (1) a "Great Migration" to the North, commencing in 1915, and (2) a small but then unprecedented westward movement beginning about 1940. Both migrations were fostered by wartime demands for labor and by postwar job opportunities in northern and western urban centers. More than three out of four black Americans live in metropolitan areas, notably in Washington, D.C., Atlanta, Chicago, Detroit, New Orleans, Newark, Baltimore, and New York City, which had the largest number of black residents. Large-scale federal programs to ensure equality for African Americans in voting rights, public education, employment, and housing were initiated after the historic 1954 Supreme Court ruling that barred racial segregation in public schools. By 1966, however, in the midst of growing and increasingly violent expressions of dissatisfaction by black residents of northern cities and southern rural areas, the federal Civil Rights Commission reported that integration programs were lagging. Throughout the 1960s, 1970s, and 1980s, the unemployment rate among nonwhites in the United States was at least double that for whites, and school integration proceeded slowly, especially outside the South.

Also included in the US population are a substantial number of persons whose lineage can be traced to Asian and Pacific nationalities, chiefly Chinese, Filipino, Japanese, Indian, Korean, and Vietnamese. The Chinese population is highly urbanized and concentrated particularly in cities of over 100,000 population, mostly on the West Coast and in New York City. The Japanese population has risen steadily from a level of 72,157 in 1910. Hawaii has been the most popular magnet of Japanese emigration. Most Japanese in California were farmers until the outbreak of World War II, when they were interned and deprived of their landholdings; after the war, most entered the professions and other urban occupations.

Hispanics in 2003 made up the largest minority group in the United States. Although Mexicans in the 21st century were still concentrated in the Southwest, they have settled throughout the United States; Mexico was the largest source country for immigration in 2002. Spanish-speaking Puerto Ricans, who often represent an amalgam of racial strains, have largely settled in the New York metropolitan area, where they partake in considerable measure of the hardships and problems experienced by other immigrant groups in the process of settling in the United States. Since 1959, many Cubans have settled in Florida and other eastern states.

you really helped me with this website!!! Thanks!!
2
Natasha

Nice website! This really helped me on my essay! Credit to you!
3
lily

wow! thanks this website helped a TON when i was working on my report!!
4
Good job!

Thanks website! U really helped me on my project and gave me great info! Its all from u!
5
krhesia

thanks!!! this website helped me a lot on my model united nations project:)
6
anomynous :)

this website helped me alot with my World Geo. prject! THANX(:
8
miriam

than you for letting me read this article it helps me a lot:]
10
Jonny

Though my question wasn't answered here. I still enjoyed the reading. I found it interesting !! So thank you any way. As I continue my search .
13
laopu

INFORMATIVE AND COOL
DIDNT KNOW HELPS A LOT THANKS