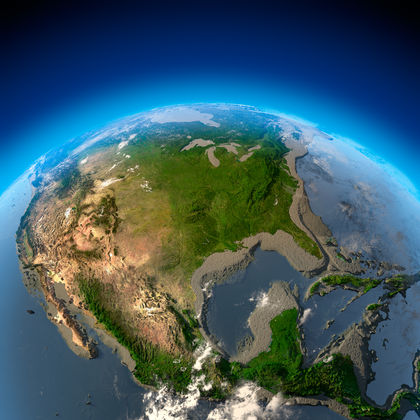 The eastern continental region is well watered, with annual rainfall generally in excess of 100 cm (40 in). It includes all of the Atlantic seaboard and southeastern states and extends west to cover Indiana, southern Illinois, most of Missouri, Arkansas, Louisiana, and easternmost Texas. The eastern seaboard is affected primarily by the masses of air moving from west to east across the continent rather than by air moving in from the Atlantic. Hence its climate is basically continental rather than maritime. The midwestern and Atlantic seaboard states experience hot summers and cold winters; spring and autumn are clearly defined periods of climatic transition. Only Florida, with the Gulf of Mexico lying to its west, experiences moderate differences between summer and winter temperatures. Mean annual temperatures vary considerably between north and south: Boston, 11° C (51° F ); New York City, 13° C (55° F ); Charlotte, N.C., 16° C (61° F ); Miami, Fla., 24° C (76° F ). The Gulf and South Atlantic states are often hit by severe tropical storms originating in the Caribbean in late summer and early autumn.

The prairie lands lying to the west constitute a subhumid region. Precipitation usually exceeds evaporation by only a small amount; hence the region experiences drought more often than excessive rainfall. Dryness generally increases from east to west. The average midwinter temperature in the extreme north—Minnesota and North Dakota—is about–13° C (9° F ) or less, while the average July temperature is 18° C (65° F ). In the Texas prairie region to the south, January temperatures average 10–13° C (50–55° F ) and July temperatures 27–29° C (80–85° F ). Rainfall along the western border of the prairie region is as low as 46 cm (18 in) per year in the north and 64 cm (25 in) in the south. Precipitation is greatest in the early summer—a matter of great importance to agriculture, particularly in the growing of grain crops. In dry years, the prevailing winds may carry the topsoil eastward (particularly from the southern region) for hundreds of miles in clouds that obscure the sun.

The Great Plains constitute a semiarid climatic region. Rainfall in the southern plains averages about 50 cm (20 in) per year and in the northern plains about 25 cm (10 in), but extreme year-to-year variations are common. The tropical air masses that move northward across the plains originate on the fairly high plateaus of Mexico and contain little water vapor. Periods as long as 120 days without rain have been experienced in this region. The rains that do occur are often violent, and a third of the total annual rainfall may be recorded in a single day at certain weather stations. The contrast between summer and winter temperatures is extreme throughout the Great Plains. Maximum summer temperatures of over 43° C (110° F ) have been recorded in the northern as well as in the southern plains. From the Texas panhandle north, blizzards are common in the winter, and tornadoes at other seasons. The average minimum temperature for January in Duluth, Minn., is–19° C (–3° F ).

The higher reaches of the Rockies and the mountains paralleling the Pacific coast to the west are characterized by a typical alpine climate. Precipitation as a rule is heavier on the western slopes of the ranges. The great intermontane arid region of the West shows considerable climatic variation between its northern and southern portions. In New Mexico, Arizona, and southeastern California, the greatest precipitation occurs in July, August, and September, mean annual rainfall ranging from 8 cm (3 in) in Yuma, Ariz., to 76 cm (30 in) in the mountains of northern Arizona and New Mexico. Phoenix has a mean annual temperature of 22° C (71° F ), rising to 33° C (92° F ) in July and falling to 11° C (52° F ) in January. North of the Utah-Arizona line, the summer months usually are very dry; maximum precipitation occurs in the winter and early spring. In the desert valleys west of Great Salt Lake, mean annual precipitation adds up to only 10 cm (4 in). Although the northern plateaus are generally arid, some of the mountainous areas of central Washington and Idaho receive at least 152 cm (60 in) of rain per year. Throughout the intermontane region, the uneven availability of water is the principal factor shaping the habitat.

Climatic conditions vary considerably in the vastness of Alaska. In the fogbound Aleutians and in the coastal panhandle strip that extends southeastward along the Gulf of Alaska and includes the capital, Juneau, a relatively moderate maritime climate prevails. The interior is characterized by short, hot summers and long, bitterly cold winters, and in the region bordering the Arctic Ocean a polar climate prevails, the soil hundreds of feet below the surface remaining frozen the year round. Although snowy in winter, continental Alaska is relatively dry.

Hawaii has a remarkably mild and stable climate with only slight seasonal variations in temperature, as a result of northeast ocean winds. The mean January temperature in Honolulu is 23° C (73° F ); the mean July temperature 27° C (80° F ). Rainfall is moderate—about 71 cm (28 in) per year—but much greater in the mountains; Mt. Waialeale on Kauai has a mean annual rainfall of 1,168 cm (460 in), highest in the world.

hi my name is shelly and i am doing a project on the annual rainfall in the US. the northern states vs. the southern states. this webpage was of great use to me. the data is well put out and easy to read. i'm hoping it is accurate. [i think it is] i would just like to say thanks and congrads! on having such a great page. i will make sure to recommend this page to my friends that have to do the same project as me....
2
shundin atene

your article was great it help with an assignment i have to do. and it was about the southern weather and this was great information.
3
taylor

this helped me when i was doing reasearch THANKS!!!!!!
4
Hemlock Griffin

Thank you for the information provided on this website. I greatly appreciate the managability of the information. I am researching climates because i am relocating to a warmer/dryer climate for my juvenile rheumatoid arthritis.

This was good for my research! I was doing a project about the eastern united states and this had some good info.
7
Vincent McKnight

this is my best source of info on the western region climate. Thank you for making such a useful site.
8
Britney

Thanks!!!This was so helpful for this thing I did called a Nation Notebook.I look up the average temperature for the U.S. on Google and it led me straight to this site. :)
10
Soph

thanks sooo much!! I couldnt find info on southeastern states ANYWHERE! this site is great!
11
Joaquina

This website is AWESOME!! I couldn't find info on the South Atlantic region that I needed for my summer project ANYWHERE! c:
12
Sammie

I am so happy with this article! I was looking for info on the climate and annual rainfall of the habitat of cupido comyntas for a project and this totally helped!