Since 1950, the United States has generally recorded deficits in its overall payments with the rest of the world, despite the fact that it had an unbroken record of annual surpluses up to 1970 on current-account goods, services, and remittances transactions. The balance of trade, in the red since 1975, reached a record deficit of $249 billion in 1998. The nation's stock of gold declined from a value of $22.9 billion at the start of 1958 to $10.5 billion as of 31 July 1971, only two weeks before President Nixon announced that the United States would no longer exchange dollars for gold. From 1990–98, the value of the gold stock was stable at $11 billion. On 12 February 1973,

In millions of dollars. Details may not equal totals due to rounding. (X) Not applicable. (-) Represents zero or less than one-half of value shown. January–December, Cumulative 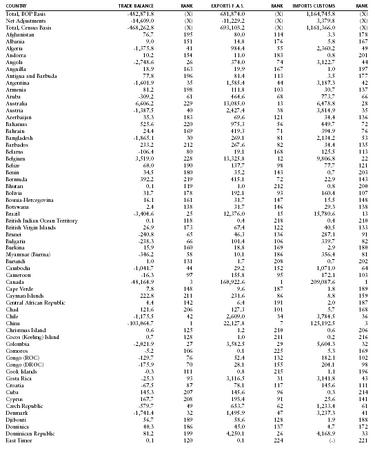 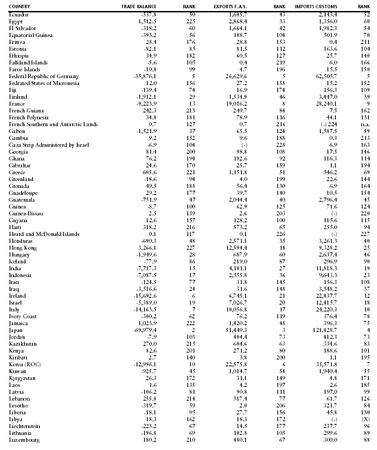 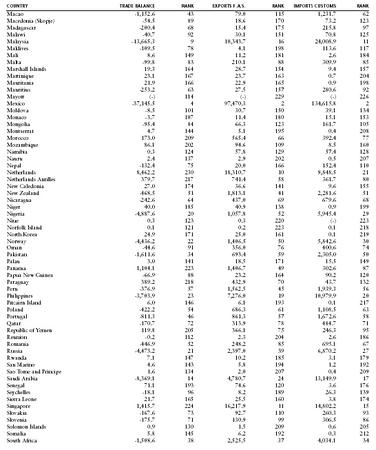 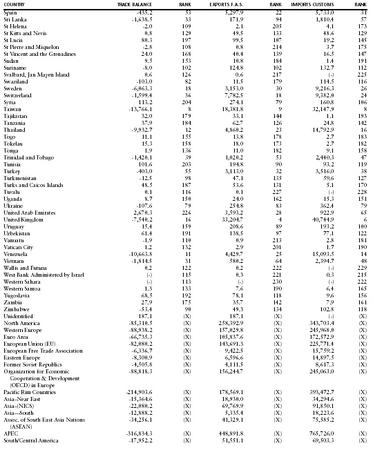 pressures on the US dollar compelled the government to announce a 10% devaluation against nearly all of the world's major currencies. US international gold reserves thereupon rose from $14.4 billion in 1973 to $15.9 billion at the end of 1974; as of 1999, US gold reserves stood at $75 billion, down from $102 billion in 1990

Despite the decline in the value of the dollar in 2003, the current account was forecast to remain in substantial deficit for 2003/04. The volume of US imports and exports surpasses that of any other country, but exports of goods and services accounted for less than 11% of GDP in 2001.

The US Central Intelligence Agency (CIA) reports that in 2001 the purchasing power parity of the United States' exports was $723 billion while imports totaled $1.15 trillion resulting in a trade deficit of $425 billion.

The International Monetary Fund (IMF) reports that in 2001 the United States had exports of goods totaling $722 million and imports totaling $1.15 trillion. The services credit totaled $276 billion and debit $210 billion. The following table summarizes the United States' balance of payments as reported by the IMF for 2001 in billions of US dollars. 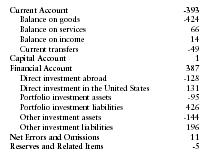