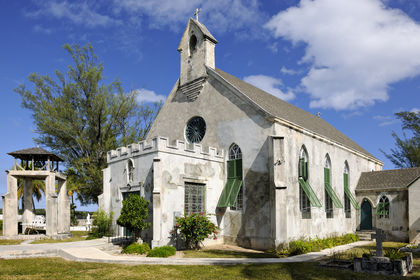 The population is overwhelmingly Christian, with Baptists comprising about 32%. About 20% of the population are Anglicans and about 24% belong to other Protestants groups such as the Methodists (6%), the Church of God (6%), the Presbyterians, Seventh-Day Adventists, and members of the Salvation Army. About 19% of the population are Roman Catholics. There is also a strong Greek Orthodox community. Smaller groups include Jews, Baha'is, Muslims, Hindus, and Rastafarians. More traditional practices related to witchcraft and known to scholars as voodoo or obeah continue to be observed in some areas.

Religion, with a focus on Christianity, is considered an academic subject in government schools. Although students may freely choose not to participate in religious instruction or observance outside of their own faith, the topic is included in mandatory standardized tests.

Is there a book that has comprehensive information about various denominations in The Bahamas that is jr. high school student friendly?
2
taylor

This was very helpful since i am doing a project on the Bahamas and its customs. But my teacher is saying a Reliable source is good. is it a source which tells us the right information?
4
Alexandro