Inadequate transportation facilities have been a major impediment to Paraguay's development. For a long time, some 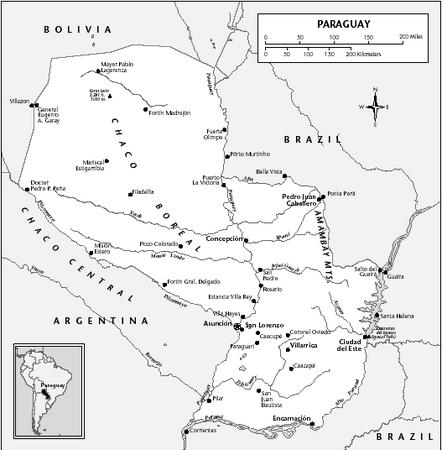 3,100 km (1,925 mi) of domestic waterways provided the chief means of transportation, with most vessels owned by Argentine interests. Hampered by the high costs and slow service of Argentine riverboats transporting cargo to and from Buenos Aires, the Paraguayan government put its own fleet of riverboats in operation. This remedy, however, did not solve the underlying problems of Paraguayan transport. Drought conditions frequently affect navigation, and while the Paraguay is open to river traffic as far as Concepción (about 290 km/180 mi north of Asunción), passage is sometimes hazardous to vessels of even medium draft. The inland waterways and the Rio de la Plata handle more than half of Paraguay's foreign trade with Argentina, Brazil, Chile, Europe, Japan, and the US.

Asunción, the chief port, and Concepción can accommodate oceangoing vessels. In 2002, Paraguay had 21 merchant vessels, with a total capacity of 34,623 GRT. In addition, Paraguay has been given free port privileges at Santos and Paranaguá, Brazil. More than 90% of Paraguay's foreign trade passes to Asunción through ports in Argentina and Uruguay. A four-year project begun in 1967 substantially improved Asunción's cargo-handling capacity.

Road construction is another critical focus of development. In 2001, highways totaled an estimated 29,901 km (18,580 mi); of these roads, however, only 3,067 km (1,906 mi) were asphalted. Two major road projects of the 1960s were the Friendship Bridge on the Brazilian border in the Iguaçu Falls area, inaugurated in 1961, and the 770-km (480-mi) all-weather Trans-Chaco Road, which extends from Asunción to Bolivia. The Friendship Bridge permits highway travel from Asunción to the Brazilian Atlantic port of Paranaguá. A bridge over the Paraguay River, linking the western and eastern parts of the country, was inaugurated in 1978. All-weather roads connecting Asunción with Buenos Aires and Puerto Presidente Stroessner with Paranaguá have also been completed. In 2000, 71,600 passenger cars and 77,300 commercial vehicles were in use.

In 1961, the 441-km (274-mi) British-owned Paraguayan Central Railroad was sold to Paraguay for $560,000; it was subsequently renamed Ferrocarril Presidente Carlos Antonio López. There is a direct line between Asunción and Buenos Aires. Altogether there are some 971 km (603 mi) of trackage, including narrow-gauge industrial lines in the Chaco.