Panama does not issue its own currency, therefore government spending and investment are limited by taxes, customs, and foreign loans. 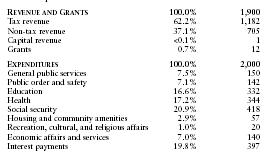