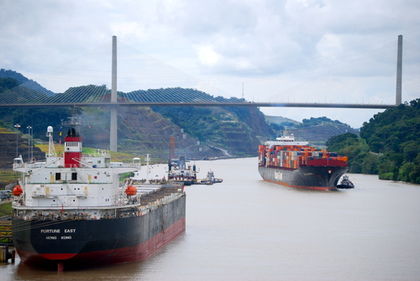 Soil erosion and deforestation are among Panama's most significant environmental concerns. Soil erosion is occurring at a rate of 2,000 tons per year. During 1990-1995, the annual average rate of deforestation was 2.15%. Air pollution is also a problem in urban centers due to emissions from industry and transportation. In 1996, industrial carbon dioxide emissions totaled 6.6 million metric tons. Only 79% of rural dwellers have pure drinking water. Pesticides, sewage, and pollution from the oil industry cause much of the pollution. Agencies with environmental responsibilities include the Ministry of Health and Ministry of Rural Development. The Smithsonian Tropical Research Institute, in Balboa, conducts studies on the conservation of natural resources. The nation's fish resources are threatened by water pollution. As of 2001, 17 of Panama's mammal species are endangered, and 10 of the nation's bird species are also endangered. Of the nation's plant species, a total of 1,018 are threatened with extinction. Endangered species include the red-backed squirrel monkey, tundra peregrine falcon, spectacled caiman, American crocodile, and four species of sea turtle (green sea, hawksbill, olive ridley, and leatherback).

This websight is awsome thnaks the help on my report!! :)
2
linda

thanks for the info about panama. i think that we need to help panama and get them on thier feet.
3
navi

this had really helped on my side of the report \thanks
4
emily!

SWEET! this helped a bunch! i have a report on panama do and this really moved me foreward
5
amber

thank you this helped so much i love it when i can under stand something and put it in my own words.
6
keyah

heyy this really worked for a group project....i didn't know that much about panama and the funny thing is my mom was born there...anyway this was a lot of help...thnx
7
ally :)

this site helped me thanx!! i have a report due on panama in 2 days so thanx!!
8
Justin

THANK YOU WHOEVER MADE THIS!! it helped me so much I have been looking everywhere for this for my project!
10
Ruth

Do you have any information about the causes?

Are there any city departments that have environmental standards? If so how many?
thanks :)
13
stephanie

thank you so much! I am writing a report on Panama City's environment and this really helped!
14
#ItsAndreNigga

Ty, This website is great, It helped me write my report for spanish class :D
15
Lolnope

Needed this for a spanish thing. Why are so many people doing projects on this wtf
16
Natalie

Omg thank you so much this was so helpful. I needed to to a project about the environment of Panama
17
Jesse

thanks for the information about Panama it really helped me in my class. thanks to this i passed on my project.
18
Alison

This helped me and my group so much thank you guys for making this about panama, we are doing a project and it helped us sooo much
20
ME

Hello peoples this really helped me with my report on Panama thank this site for giving me an A.
22
taylor

thank you so much this helped me a ton for my project on panama!
23
ryan

I'm glad It's very straightforward and I don't have to look around for info. I would like to know though if there is a common reason why those animals are going extinct. Otherwise, It's a great article.
26
Justin

First Comment! Thx, this was great for my report! :)
29
Nathaniel

Thanks for the info! Now my science project on Pollution would be great!
30
Sans Bruh First Name Last Name

Hello, i used this article for my geography project in my world history class, it helped a lot with information and my teacher said it was a good source.
I also love nations encyclopedia it has so much useful information that I used for my other projects in other classes, like ap literature and ap euro. I also got a c plus on the project which is the best grade ive ever gotten.

Thank you so much nations encyclopedia for this crucial information!
Nick
32
Hannah B. (6th grade currently) :3

Thank you for whoever made this website! This was really useful for a project I am doing for history class! It gives you the basics but in a very detailed version. And no, this is NOT Panama City beach,Florida. This is the country, Panama! Hopefully I’ll see my comment in the future lol. Bye for now! :D (And I’m Panamanian also!)