Panama's adverse balance of trade is largely made up by invisible foreign exchange earnings from sales of goods and services in the Colón Free Trade Zone and from the Panama Canal. Nonetheless, Panama has had one of the highest amounts of goods and services export earnings in the region, relative to GDP. A strong services sector and foreign direct and financial investments have usually offset large merchandise trade deficits. In addition, Panama's debt traditionally trades with less volatility and a lower risk premium than most other Latin American issues.

The US Central Intelligence Agency (CIA) reports that in 2001 the purchasing power parity of Panama's exports was $5.9 billion while imports totaled $6.7 billion resulting in a trade deficit of $800 million.

The International Monetary Fund (IMF) reports that in 2001 Panama had exports of goods totaling $5.88 billion and imports totaling $6.71 billion. The services credit totaled $1.82 billion and debit $1.14 billion. The following table summarizes Panama's balance of payments as reported by the IMF for 2001 in millions of US dollars. 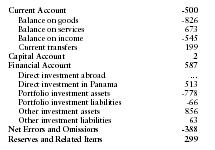