Main transportation arteries are concentrated in the more densely populated Pacific region. The national road network in 2002 totaled 16,382 km (10,026 mi), of which 1,818 km (1,130 mi) were paved. The Inter-American Highway from Honduras to Costa Rica was completed in 1972. The Pacific Highway begins in Granada and passes through Managua, León, and Chinandega to Corinto. In 2000 there were 40,800 passenger cars and 60,500 commercial vehicles registered. Pacific Railways of Nicaragua, government-owned, with a length of 373 km (231 mi), was shut down in 1993. In 2002, the 6 km (3.7 mi) narrow gauge track was mostly used to carry passengers from Chichigalpa to Ingenio San Antonio.

The Naviera Nicaragüense provides regular services to Central America, the US, and Europe. As of 2002 Nicaragua had no merchant fleet. Corinto is Nicaragua's only natural harbor on the Pacific coast and the major port, handling about 60% of all waterborne trade. Other ports include Puerto Sandino and San Juan del Sur on the Pacific and Puerto Cabezas on the Atlantic coast. In 1983, Bulgaria pledged to help Nicaragua build a deepwater port at El Bluff, on the Atlantic; the port now allows ships from Europe, Africa, and the Caribbean to deliver goods to Nicaragua without passing through the Panama Canal. Inland waterways total 2,220 km (1,380 mi), including Lake Nicaragua and the San Juan River.

Air transportation is important because of limited road and railway facilities. In 2001, there were an estimated 182 airports, 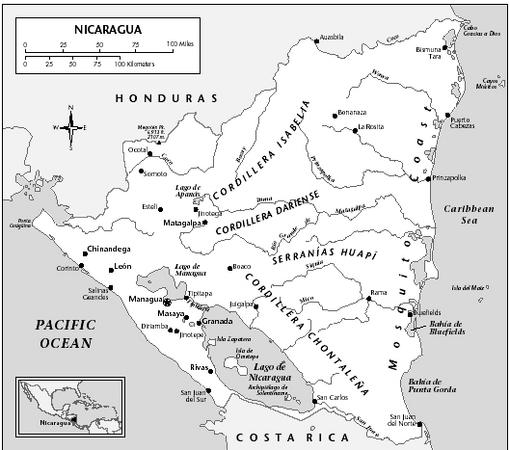 only 11 of which had paved runways. A new state-owned airline, Aerolíneas de Nicaragua (AERONICA), provides services to El Salvador, Costa Rica, Panama, and Mexico. The principal airport is Augusto Sandino, an international terminal at Las Mercedes, near Managua. In 2000, 61,000 passengers were carried on scheduled domestic and international flights.