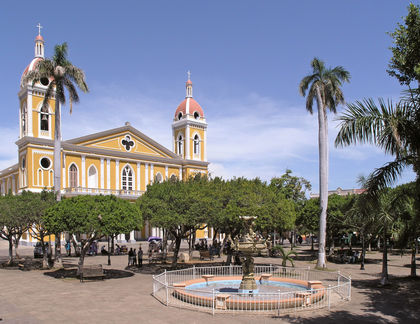 Roman Catholicism is the predominant religion, claiming the allegiance of about 72.9% of the population. Approximately 15.1% of the populace are members of evangelical churches. Another 1.5% are members of the Moravian Church, and 0.1% belong to the Episcopal Church. An additional 1.9% claim membership in other churches or religious groups; 8.5% profess no religion or are atheistic. There are also small communities of Jews, Muslims, Mormons, Mennonites, Jehovah's Witnesses, Unification Church members, Baha'is, and members in the Church of Scientology. Amerindian tribal religionists and spiritists also practice, usually combining elements of Christianity and African religions.

Nicaragua does not have a state religion; however, the Roman Catholic Church seems to have significant political influence in the country.

This will help me with my spanish powerpoint project
5
Ryan

This whole website helped so much for my social studies project.
6
LIYAH

This is really gonna help me with my spanish powerpoint project ;)
9
Ryan

I would have failed my project without this site-Thanks =)
12
Marcayla M.

THIS ARTICLE REALLY WOULD HELP ME ON MY SOCIAL STUDIES PROJECT!
13
Matthew T.

THIS HELP ME SO MUCH I FINISHED
MY POWERPOINT SPANISH PROJECT.
14
annoymus

thannk you for saving my dog...it helps a lot. gracias chicos.
15
Gavin

This article really helped me with my spanish report. Thx
17
Toni

Thank you so much for this. It helped me with my AP human geo project.