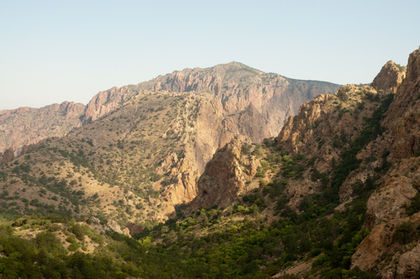 Mexico's dominant geographic feature is the great highland central plateau, which occupies most of the width of the country, extending from the US border to the Isthmus of Tehuantepec. It averages 1,219 m (4,000 ft) in elevation in the north to over 2,438 m (8,000 ft) in the central part of the country. The plateau is enclosed by two high cordilleras (mountain chains), the Sierra Madre Oriental on the east and the Sierra Madre Occidental on the west, each separated from the coast by lowland plains. The ranges rise to over 3,000 m (10,000 ft), and some volcanic peaks exceed 5,000 m (16,400 ft); Pico de Orizaba, or Citlaltépetl (5,700 m/18,702 ft), Popocatépetl (5,452 m/17,887 ft), and Ixtaccíhuatl (5,286 m/17,342 ft) are the highest. The plateau falls to the low Isthmus of Tehuantepec and then rises again to Chiapas Highland to the south. The lowlands of Tabasco, Campeche, and Yucatán lie north and east of Chiapas.

There are no important inland waterways. Except for the Rio Grande (known as the Río Bravo del Norte in Mexico), which extends for about 2,100 km (1,300 m) of the boundary with the US, and the Papaloapan, an important source of waterpower, the other rivers are short; they are the Lerma, Santiago, Usumacinta (part of the boundary with Guatemala), Grijalva, Balsas, Pánuco, and the Soto la Marina. The largest lake in Mexico is Lake Chapala, in Jalisco State, covering about 1,686 sq km (651 sq mi).