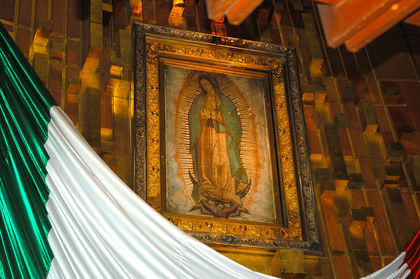 According to the 2000 census, about 88% of the Mexican population is at least nominally affiliated with the Roman Catholic Church and about 6% are Protestant. Christian denominations represented include Presbyterians, Jehovah's Witnesses, Seventh-Day Adventists, Mormons, Lutherans, Methodists, Baptists, and Anglicans. There are small Greek and Russian Orthodox communities. There are also small numbers of Jews, Buddhists, and Muslims. While professing the Roman Catholic faith, a number of indigenous people include strong pre-Hispanic Mayan elements in their religion.

Following an amendment to the constitution adopted in 1991, ecclesiastical corporations now have legal rights and can acquire property. All church buildings, including schools, however, remain national property. Priests now have political rights, and religious control over both public and private education prohibited earlier under the 1917 constitution has been restored. Roman Catholicism has increased greatly in activity since the 1940s; there have been religious processions and considerable construction of new churches in major cities. The bitter anticlericalism of the Mexican Revolution, of the 1917 constitution, and of the administration of President Plutarco Elías Calles (1924–28) had lessened by the 1960s. In 1992, full diplomatic relations with the Vatican were established.

this helped me so much on my home work i think my class will love to know all this..8)
2
kriss:)

this was a freakin awesome thing to read! i never knew how much information you could leard from this!
3
coleystoller

THIS SITE QUITE HELPED. I HAVE TO MAKE A POWER POINT PRESENTATION OVER MEXICO, AND ONE OF THE SLIDES HAD TO BE ABOUT THEIR RELIGION. THIS SITE GAVE ME THE BASIC FACTS I NEEDED.
4
Angel

This article was very helpful for my report on Mexico I needed to know the major reliogion and I found this article!!! :)
5
Liza

Needs more actual hard numbers instead of generality other than that thanks!
6
chelsea

thank you so much for this information that i needed badly for my spanish project.:)
7
Kayla Garcia

Beautuful article I read. Thank you. I need to work on my spanish. Hard life. Thank
9
rojas :)

oh this website didnt give me all the info i needed but it gave more info which can halp in the near feature. thanks so much :)
10
killerhd12

this is very helpful for my school report. im writing about mexico
12
LEANSIMPSON

I LOVED IT. IT IS VERY HELPFUL FOR MY SCOOL PROJECT.
13
raja allen

What is the last 6%? Not the protestant religion. I need an answer quickly.
16
Jilly

Very nice. I kinda wanted a few more info but this is totally ok. Thanks.
17
tad

THANK YOU FOR THAT. THIS WAS WHAT I WANTED. I LOVE MEXICO
18
aditi

this is a very helpful artical my teachers will be very happy by reading this.thanks
19
Mortician's Daughter

Thank you so much! It's just what I needed for my Spanish assignment!
20
LIndsay

i didnt get anything from this...
thanks not
i didnt get the things i needed. i needed tho know a major religion. not all the stuff.
21
sarah

this article has helped me with my school projects. Thanks alot whoever created this.
22
kalebthomas