Major sources of revenue are income taxes, a VAT, and public enterprise revenues. Among regular government departments, education receives the largest budget allocation, but outlays for debt service, subsidies to federal enterprises, and capital expenditures for highways, irrigation, and hydroelectric projects have exceeded regular departmental expenditures in recent years. The public-sector deficit usually increases sharply in the last year of a presidential term as the outgoing administration strives to complete its public works program.

During the 1960s, government revenues rose at a faster rate than GDP, with revenues from income taxes (including surcharges) increasing by 170% in the 1960–69 period. Budgets in the 1970s and early and mid-1980s continued to show current-account "surpluses," or minimal apparent deficits; the fact that borrowings and transfers are built into the budget structure masked the true magnitude of annual deficits. In the late 1970s and the early 1980s, real budget deficits increased substantially, reaching nearly 18% of the GDP by 1982. By slashing public spending, the government was able to bring the deficit down to8.9% of the GDP in 1983 and 7.1% in 1984, but the collapse of the world oil price sent it up to 16.3% in 1986. By the early 1990s, however, public finances were strengthening, and a surplus (on a cash basis) of P 35,054 million was recorded in 1992, equivalent to 3.4% of GDP in 1991. Nonrecurrent revenues amounted to P 30,123 million, mainly derived from the sale of shares of the state-owned telephone company and bank privatization. Excluding privatization revenues, the surplus in 1992 was equivalent to 1.5% of GDP in 1992, as opposed to a deficit of 1.5% in 1991. Public revenues policy in 1992 sought to widen the tax base and simplify and enforce tax administration. At the same time, public expenditures have been reoriented to provide basic infrastructure and services. In 1997 and 1998 there was a current account deficit equaling 0.70% and 1.3% respectively. 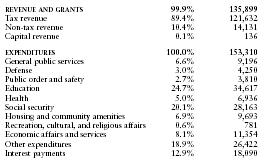