National and international telegraphic service is furnished by the government-owned National Telegraph Co. The government also owns and operates the international radiotelegraph and radiotelephone facilities. A privately owned telephone company provides supplemental facilities in outlying areas. The largest utility is the government-owned Telephones of Mexico. The number of mainline telephones in service in 2000 was 12.3 million. In 1998 there were also 2 million cellular phones in use.

The national microwave network, now complete, cost more than P 650 million; facilities by 1968 included the central telecommunications tower in the Federal District and a land station for artificial satellite communications at Tulancingo, Hidalgo, with one of the largest antennas in the world. The network serves most of the country's larger cities.

Leading newspapers (with their estimated average daily circulations in 2002) include the following: 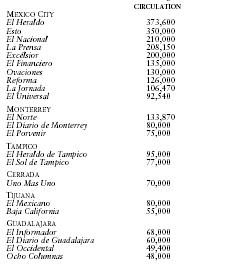 Freedom of the press is guaranteed by law and to a large extent exercised in practice. However, by controlling the supply of newsprint and by providing advertising, indirect subsidies, and outright payoffs to the press, the government exerts an indirect form of press censorship. Mexico's libel and slander laws were made more restrictive in 1982.