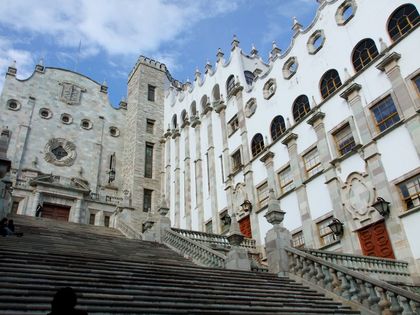 Primary schooling is compulsory and free. Except in the Federal District, where education is administered by the federal government, schools are controlled by the states. As of 1995, public expenditure on education was estimated at 5% of GDP.

Between 1960 and 1965, for each 100 pupils enrolled in the first grade, only 23 completed the sixth, for an attrition rate of 77%. At the other end of the educational cycle, only 12,000 graduated from institutions of higher education. A 1968 government report stated that approximately 97% of Mexico's youth between the ages of 16 and 25 were unprepared to participate in the country's development. In 1971, only 74% of children of the age for obligatory schooling (between 6 and 14) attended school. Significant improvement had been recorded by the late 1970s, when an estimated 92% of eligible boys and 90% of eligible girls were actually in primary school; the figures for secondary school in 1984 were 56% and 53%, respectively. By the 1990s virtually 100% of primary-school-age children were enrolled in school. In 1999, 57% of secondary-school-age children attended school.

This is very interesting and teaches a lot. It helped me a lot on my project about Mexico.
3
jose

Its give very good details of the years of school in Mexico!!!
4
None of ur Business

This is not very good!!! Im doing a report on Mexico but this is not doing me any good!
5
Miley!

I think that this web page is a good place to learn about Mexico and its education. I am doing a report and this helped me. :) thanxx
6
kaitae

very sweet! oh snap! this page helped me alot with my report
7
Desiree

Thanks your website really helped me out and that ill be visiting it more often:)
8
Arantza

its a good story to share, many families do not have the enough money to give ther familys somegood education so they have to emigrate to places that they do not even now.