Mexico's balance of payments, in deficit throughout much of the 1960s, turned favorable in the 1970s, as inflows of foreign funds rose fast enough to offset the worsening visible trade balance. However, during the 1980s a steep rise in imports due to trade liberalization led to a growing imbalance. Mexico's external position had so deteriorated by 1986 that the IMF and World Bank coordinated a financial rescue package of $12 billion and commercial banks agreed to reschedule $44 billion in foreign debt; an innovative feature of the agreement was that repayment was effectively tied to Mexico's oil export earnings. Mexico began running a current account deficit in 1988, that remained through the 1990s. Following the 1994 devaluation of the peso, international lenders provided $40 billion in economic aid, half from the US. This influx of capital resulted in bringing the current account deficit to less than 1% of GDP in 1995, from at least 7% in 1994.

Since the introduction of NAFTA in 1994, trade with the US and Canada tripled. The government implemented free trade agreements with Guatemala, Honduras, El Salvador, and the European Free Trade Area in 2001. More than 90% of Mexico's trade is under free trade agreements. Foreign direct investment stood at $25 billion in 2001.

The US Central Intelligence Agency (CIA) reports that in 2001 the purchasing power parity of Mexico's exports was $159 billion while imports totaled $168 billion resulting in a trade deficit of $9 billion.

The International Monetary Fund (IMF) reports that in 2001 Mexico had exports of goods totaling $158.4 billion and imports totaling $168.4 million. The services credit totaled $12.7 billion and debit $17.2 billion. The following table summarizes Mexico's balance of payments as reported by the IMF for 2001 in millions of US dollars. 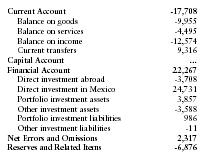 can i get detail imformation of mexico balance of payment