Debt servicing accounts for about 62% of the fiscal budget, which limits economic expansion. Privatization of public entities has been one of the strategies used by the government to reduce the budget deficit. In 2001, the government raised $3.6 billion in new sovereign debt in both local and international financial markets, and used it to meet its US dollar debt obligations, quell rampant liquidity in order to maintain the exchange rate, and partially fund that current year's budget deficit.

The US Central Intelligence Agency (CIA) estimates that in 2001 Jamaica's central government took in revenues of approximately $2.2 billion and had expenditures of $3.0 billion. Overall, the government registered a deficit of approximately $770 million. External debt totaled $5.2 billion. 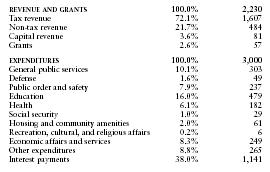