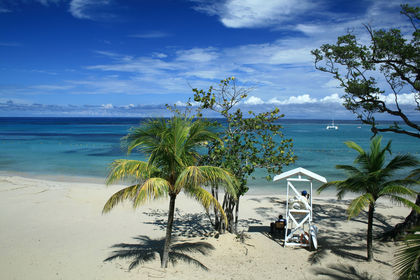 Among the government agencies charged with environmental responsibilities are the Ministry of Health and Environmental Control, the Ministry of Agriculture, and the Natural Resources Conservation Authority. The major environmental problems involve water quality and waste disposal. Jamaica has 9.4 cu km of renewable water resources with 77% used for agriculture and 7% used for industrial purposes. About 85% of the people living in rural areas and 98% of the city dwellers have access to pure drinking water. Coastal waters have been polluted by sewage, oil spills, and industrial wastes. Another major source of water pollution has been the mining of bauxite, which has contaminated the ground water with red-mud waste. Another environmental problem for Jamaica is land erosion and deforestation. Forest and woodland decreased 7% annually between 1990 and 1995. Jamaica's coral reefs have also been damaged. The nation's cities produce over 0.3 million tons of solid waste per year. Kingston has the waste disposal and vehicular pollution problems typical of a densely populated urban area.

In 2001, four of Jamaica's mammal species were endangered, as were seven bird species and eight reptile species. About 680 plant species are also threatened. Endangered species in Jamaica 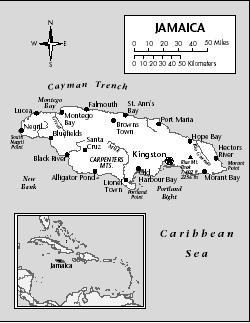 hey,
im doing an assignment on jamaica at school and i was searching about tehre enviroments and i couldnt help my self but to leave a comment i love jamaica
2
kye

this was very useful for my geography notes, thanks!
3
Jackie

The article proved very informative. It was amazing to find out about other endangered species like the Green Sea Turtle.
4
Hunter Ashley

I have to say this article has been a very enlightening one for me. I am Jamaican born and raise until the age of 19. I now attend college in the USA. At this current time I am in Salzburg, Austria- Europe and i'm working on a research about counties that are experiencing environmental issues and I chose Jamaica. I could not believe the things that I read in this article.

I just want to say thanks to the author!
6
conod dennis

I don't know jamaica is a beautiful place yet the authorities are not doing much to help stem pollution, i'm not going to behave like an ostrich the problem exist and it needs to be fixed before it's too late
7
kim dias

im glad i found this.. all the info i need for my report on jamaica!
8
skizter

My dad is Jamaican & we go there every summer he always askes me things about Jamaica & i'm just like IDK but this helped me learn more about where i'm from. thanks
10
cathlynne

i am doing a project on the eviorment of jamaica
and this is great!!! thx sooo much!!
11
Ashley

WOW this is really good information... as well im doing a project on Jamaica! thank you
12
Dick

thanks for the help i really needed this for my project! :)
13
Mrs. Evans

this was a good source of hepl for me if only they could have a page on air pollution as well.
16
madison

This was a great first source for my Jamaica project I'm doing for school. A great source for some basic facts.
19
Taigh B

This article really helped me with my assignment, we had to write about a country and i chose Jamaica
20
Delmaria

Thanks for the info. I am a master student in Japan doing research in waste management focusing on recycling potential in Jamaica and this info helped a bit.
21
Jamaicapollution.com

This really helped with my presentation about Jamaica!
24
MendesArmy

Perfect for my book that I'm writing! This was really helpful and it was interesting, I just wouldn't use Wikipedia, though.
25
Anonymous

this article was very helpful for my project! i am glad i read it also hello everyone fhufhreuwfhufh may 6th 2019 ehhebf
27
Skye

I was doing a school project that included writing about bad pollution problems in Jamaica, this helped me find the information I need.
28
Kayla

I am doing a school research proposal and need to write a literature review on the increase of unemployment in Jamaica. Where can I find information in this . Thank you