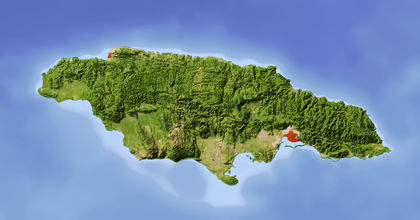 Sugar, the leading export crop, is produced mainly on plantations organized around modern sugar factories that also buy cane from independent growers. Raw sugar production in 2000 was estimated at 175,000 tons, down from 290,000 tons in 1978. Sugar is Jamaica's largest agricultural export, earning $66 million in 2001. Sugar is also used for the production of molasses (79,653 tons in 2002) and rum (24.2 million liters in 2002). Banana production in 1999 was 130,000 tons. Other major export crops in 1999 included cocoa, and coffee. Blue Mountain coffee, which is primarily exported to Japan, brings in some $12 million annually in foreign exchange earnings. Jamaica also exports coconuts, pimientos, citrus fruits, ginger, tobacco, yams, papayas, dasheens, peppers, and cut flowers. Jamaica exported $227.7 million and imported $402.7 million in agricultural products during 2001.

The island's food needs are met only in part by domestic production, and foodstuffs are a major import item. The main food crops, grown primarily by small cultivators, are sweet potatoes and yams, rice, potatoes, manioc, tomatoes, and beans. Jamaica is a major producer of marijuana, which, however, remains illegal. The government participates in a US-funded campaign to eradicate marijuana trading.

This website is very informative. Usually, it is very hard to find specific information about my country, Jamaica on the internet, but now I have found this site. I will keep on using this site.
2
tjoma

perfect story. this is the information that i need!!! there can be more about how the vegetables grow!

This info really helped me with my project for school.

I just wanted to say thanks for the research info and such!

This was great,
Really helped me with my project!

heilped me with my project too. thanx alot
x) :)

This website is very helpful because my school wwe is doing a project on jamaica because I live in the United states and me and my dad we be going to this jamaican food place but thanks because I was having a hard time trying to see what there argiculture was.
7
tyvas

this site is sweet ! hellped me alot on my project
8
Ashley Skintz Adrenaline

this really helped me out alot
thanx =D
now i hope i get a good grade!!!!
9
Wyatt

Thanks! This really helped for a school project. I had to know the major exports. Thanks again!
10
Monkeyman3056

This site owns. It gives you very good info for projects and stuff. Now whenever i do projects i look for this site. Thanks!

Thanks! I needed to know the imports and exports for a project so this helped a lot!!

Thanks for the information !

It really helped me a lot on my research !

Keep it up with the good info :]

THIS WAS RELLY HELPFUL TO MY PROJECT. THANKS ALOT.
15
sheliviea

this is a very good website ,thankyou for all the info, you've helped me some much x
16
lee

This imformation really help me out with my project.
Thanx =}
17
eryn

thanks.
this really helped me with my AP human geography project :]
18
Destiny

wow this is good info for my school project,I LOVE IT VERY MUCH WHAT A WONDER WHO KNEW! i really like it its cool and helpful
20
katy

Thanks soo much! this helped me with my LEDC geography project! I've been searching for ages now this site is me life saver! you should team up with Google to make this site more known
thanks again
23
keva

this site is really amazing...we here in Jamaica can hardly find things on the internet about our beautiful country...but thanksto this site we now have the access of finding whatever we seek for. ;)
24
shawn tulloch

this site is good it really feeds my brain thank u.u like the wish i asked for
25
grace

This really helped me with my project c:
thanks ;D
Keeep it upp, yo'.
26
Trevor

Good information..It is really going to help me out on my report!!
Yea, gwan big up yuself!!
27
IMJ

I'm writing something on how international human rights affect international business. I know that Jamaica used to be a big carrot producer until the cheaper carrot imported from the states killed the Jamaican production. I can't find much information on that and so would like to know if you could help me out. Thanks.
29
sanjay

I may finally achieve my dream of eating fresh cocoa, now that I know where it grows. This ALSO help with school. See ya.
31
davia

this agriculture stuff really make a difference.because i got an a+ yesterday try it.
32
ray2k

Does anyone know of a magazine that focusus on Jamaican Agriculture?
33
moriah

wow, that is a lot of info, i am grateful that i saw this website and clicked it and i tell my friends
34
mmm

I love this website. it helped me with my project a lot.

WOW this is just what i was looking for without this website don't know what to do! THANKS
38
franchester

wow, that is a lot of info, i am grateful that i saw this website and clicked it and i tell my friends
Thanks soo much! this helped me with my LEDC geography project! I've been searching for ages now this site is me life saver! you should team up with Google to make this site more known
thanks again
40
cody

very helpful and informative for a internet website. usually all website are really bad and info is short
41
Nicole

Yes an informative piece right here!
Can you imagine if Marijuana was legal, Jamaica would be one of the Countries doing economically well.
42
Ingrid

Thank you, this is very informative. I was in search of more specific information on agriculture in Jamaica to share with my class and I found this site. Much appreciated. Thanks
43
Rashyd

I want to start importing fruits & vegetables, meat and fish to Jamaica, is that possible and is there market?
Where can i get information about this?
Some advice will be great
my e-mail lordrashyd@hotmail.com

Thanks. This helped with how i can live with agriculture in my civilization.