Since 1973, trade balances have been negative. Investment income repatriated by foreign companies in Honduras is an endemic burden on the local economy. The Honduran authorities have generally adhered to the policies of fiscal and monetary restraint that were introduced early in 1959, following a period of exceptional strain on the country's international reserves. The fall in reserves resulted from a decline in income from the banana industry and reduced international prices for other major exports. Political instability in the region in the late 1970s to the mid-1980s, together with low commodity prices and high oil prices, had an adverse effect on the balance of payments. The 1990s brought a continuation of the negative trade balance (averaging 7% of GDP), especially after the increase of imports after Hurricane Mitch. However, increases in agricultural and clothes exports are forecast to improve the balance of payments situation. International reserves reached $700 million in 1999 due, in part, to increased remittances from abroad, and international aid following the hurricane ($300 million from the US alone).

The US Central Intelligence Agency (CIA) reports that in 2001 the purchasing power parity of Honduras's exports was $2 billion while imports totaled $2.7 billion resulting in a trade deficit of $700 million.

The International Monetary Fund (IMF) reports that in 2001 Honduras had exports of goods totaling $1.93 billion and imports totaling $2.81 billion. The services credit totaled $481 million and debit $653 million. The following table summarizes Honduras's balance of payments as reported by the IMF for 2001 in millions of US dollars. 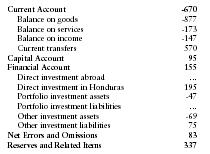