In 2002, Haiti had 4,160 km (2,585 mi) of roads, 1,011 km (628 mi) of which were paved. Farm-to-market roads are few, and most produce for the local market is transported by burro or carried on foot by women. In 1980, a new highway linking Port-au-Prince with Les Cayes was opened, and several road improvement projects have been completed; overall, however, road conditions continue to deteriorate because of flooding. There were some 19,800 passenger cars and 28,200 commercial vehicles in 2000. Also in 2000, Haiti had a ratio of 351.8 inhabitants per registered vehicle, the highest ratio of any country in the Western Hemisphere. Two railroad systems, the National Railroad of Haiti and the Cul-de-Sac Railroad, with a combined trackage of 301 km (187 mi), originally operated lines from Port-au-Prince to Verrettes and to Léogâne, and from Cap-Haïtien south to Bahon. By 1982, however, most of the system had become inoperative; the 40 km (25 mi) of lines that remained in 1999 were being used only for sugarcane transport. 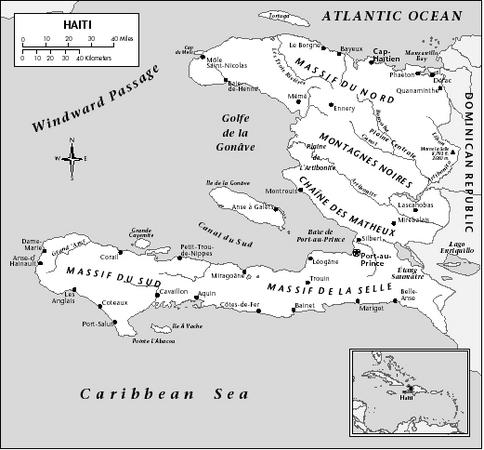 vessels of light tonnage. The island depends chiefly on foreign shipping. During the early 1980s, the IBRD sought to stimulate intercoastal trade by building port facilities at Jérémie, Port-au-Prince, and Port-de-Paix. Other ports and harbors include Cap-Haitien, Gonaives, Jacmel, Les Cayes, Miragoane, and Saint-Marc.

Please send me additional photos, maps, master plans, geographical and city maps of Port-au Prince and other regions throughout Haiti. Thank you.