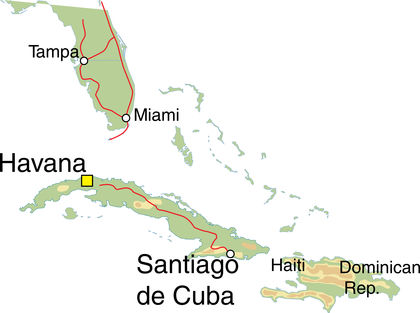 Occupying the western third of the island of Hispaniola, Haiti has an area of 27,750 sq km (10,714 sq mi) including the islands of Tortuga (La Tortue), Gonâve, Les Cayemites, and Vache. Comparatively, the area occupied by Haiti is slightly smaller than the state of Maryland. Extending roughly 485 km (300 mi) ENE-WSW and 385 km (240 mi) SSE – NNW , Haiti is bounded on the N by the Atlantic Ocean, on the E by the Dominican Republic, on the S by the Caribbean Sea, and on the W by the Windward Passage and the Gulf of Gonâve, with a total land boundary length of 360 km (224 mi) and a coastline of 1,771 km (1,100 mi). Haiti claims Navassa Island, an uninhabited US possession about 50 km (31 mi) west of Hispaniola.

Sorry for what happened. i send God,s blessings to shower unto you
3
emily

this is good, could use more information, my prayers go out to all the citizens, your in my heart. stay stong!!