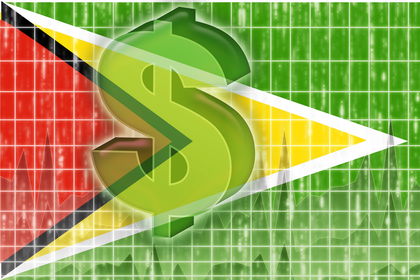 Guyana's economy is dominated by the production and processing of primary commodities, of which sugar, gold and bauxite are the most important. Much of the country is undeveloped, with more than 90% of the population and almost all of the agriculture concentrated in the narrow coastal plain. The interior is sparsely settled, and communications are poor. The bulk of the population is engaged in agriculture, either as laborers on sugar plantations or as peasant cultivators of rice. Although sugar and rice continued to be important export earners, bauxite and gold share comparable percentages of national exports. The government plays a direct role in the sugar industry; the nation's leading sugar producing company was nationalized in 1976.

Beginning in the late 1970s, Guyana's economy suffered a severe decline, attributable both to the increasingly high costs of imported oil and petroleum products (39% of Guyana's merchandise imports in 1983) and to sagging production and prices of Guyana's exports. In 1982 there were serious shortages of basic commodities, foreign exchange reserves dwindled, and Guyana was forced to reschedule its debts. In 1985, the IMF declared Guyana ineligible for further loans because of noncompliance with fund conditions and high arrears.

However, Guyana's economy improved dramatically under the Economic Recovery Program (ERP) launched by the government in April 1989. The program, which was designed with the assistance of International Monetary Fund (IMF) and World Bank officials; was supported by Canada, the UK, and the US. It marked a drastic reversal in government policy away from a predominantly state-controlled, socialist economy towards a more open, free market system. The government reformed its monetary and fiscal policy establishing a free market in foreign currency, which was designed to stabilize the exchange rate and put an end to runaway inflation. The exchange rate remained stable at G $125 to the dollar and inflation dropped from a 1989–91 annual average of 60–100% to only 14% in 1992. The growth rate reached 6% in 1991, after 15 years of decline. The government also eliminated price controls, removed import restrictions, promoted foreign investment, and divested itself of 15 of 41 state-owned enterprises by 1997.

Real GDP growth of 6.2% registered in 1997 marked the seventh consecutive year of strong recovery, with all of the key sectors demonstrating significant increases in production. Growth was particularly strong in the major export industries, including rice and sugar. Inflation had fallen to 4.2%. In July 1998, Guyana entered into a 31/2 year arrangement with the IMF under a program which combined both the Enhanced Structural Adjustment Facility (ESAF) and the Poverty Reduction and Growth Facility (PRGF) with a credit line of about $70 million. However, a severe drought and political turmoil due to the 1997 elections combined to produce a contraction of -1.7% in 1998. Real GDP grew a reported 3% in 1999, but as the pace of structural reform slackened, the currency appreciatied, and the country's overall terms of trade weakened, inflation jumped to8.7%, up from 4.7% in 1998. In May 1999 the country received some debt relief under the Highly Indebted Poor Country (HIPC) initiative mounting initially to $92 million. In 2000, real GDP contracted 1.4% though inflation declined to 5.8%. In early 2001, the IMF suspended the ESAF/PRGF program with only 46% of the money paid out due to slippages in the government's implementation of fiscal and structural reforms that sent the budget deficit soaring to 6.3% of GDP in 2000 and 7% of GDP in 2001, respectively, even after grants. Real GDP growth in 2001 was 1.4%, and inflation declined to 1.5%. In September 2002, Guyana entered into a new three-year arrangement under the IMF's PRGF supported by a credit line of $73 million. The GDP was estimated to have grown 1.8% in 2002, with inflation at 4.3%.

This article is quite pleasant, lot's of information and history.
2
turtle

It is really nice to see such a well written and informational article about Guyana. It was a great find and really helped me with my University assignment.
4
lamoir

Thanks so much for this information! It helped so much on my assignment.
5
cheer567

Wow! This really helped me on my Guyana project. It was thoroughly written with lots of information! Thanks for being detailed (whoever wrote this)!
6
jayla lane

Thanks! Very informative and well written. This really helped with my presentation on Guyanese immigration.
9
Deonarine Ramsaroop

this information is very useful and it should keep up datng.
10
melye

:P good info you should keep on updating this website x33
11
narine singh

This information very useful for catocarty including students.