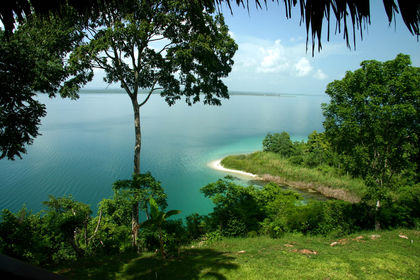 Guatemala's main environmental problems are deforestation—over 50% of the nation's forests have been destroyed since 1890—and consequent soil erosion. As recently as 1993, the nation obtained 90% of its energy from wood, losing 40,000-60,000 hectares of forest per year. Between 1965 and 1990, Guatemala also lost over 30% of its mangrove area, which totaled 16,000 hectares in the early 1990. The nation's water supply is at risk due to industrial and agricultural toxins. Guatemala has 27.8 cu mi of water with 74% used for agriculture and 17% used in farming activity. Fifty-seven percent of the people living in rural areas do not have access to pure water, compared with 8% of urban dwellers. Guatemala's cities produce 0.7 million tons of solid waste per year, which, together with thousands of tons of fertilizer annually, contribute to the pollution of the nation's soil. United Nations sources show that environmental contamination is responsible for a significant number of deaths due to respiratory and digestive illnesses. Despite the establishment in 1975 of a ministerial commission charged with conserving and improving the human environment, coordination of antipollution efforts remains inadequate, and Guatemala still suffers from a lack of financial resources and well-trained personnel to implement environmental control programs.

In 1994, 12.2% of Guatemala's total land area was protected. In the same year, 10 of Guatemala's 174 animal species and 10 in a total of 900 bird species were considered endangered. Four types of reptiles in a total of 204 and 282 plant species of 8,000 were threatened with extinction. Endangered or extinct species in Guatemala include the horned guan, Eskimo curlew, California least tern, green sea turtle, hawksbill turtle, olive ridley turtle, spectacled caiman, American crocodile, and Morelet's crocodile.

i have a question, what is the average percent of farming in guatemala? plz put some sort of chart!xD ;{0
2
Stella

Can these be linked to Guatemala poverty circle? If so, how?

Has the government come up with policies to fix these environmental issue?

How these affect the people as a whole in their dali lives?
3
Riley

Wow is there any other type of issues going on. If so please tell me
4
Chase

What are some positive human-environment interactions in Guatemala
5
Aaron

Is there any other threat other than Deforestation a toxic water supply?
6
joey