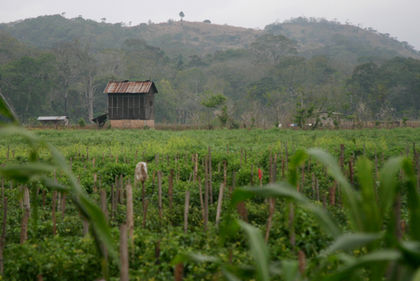 In 1998, only about 17.5% of the total land area of Guatemala was used for the production of annual or perennial crops, although almost two-thirds is suitable for crop or pasture use. Agriculture contributes about 23% to GDP, makes up 75% of export earnings, and employs 50% of the labor force. The principal cash crops are coffee, sugar, bananas, and cotton, followed by hemp, essential oils, and cacao. Coffee is grown on highland plantations; most of the bananas are produced along the Atlantic coastal plain. Cash crop output in 1999 included 15,459,000 tons of sugarcane, 200,000 tons of coffee, 3,000 tons of cotton, and 733,000 tons of bananas. Subsistence crop production included 1,109,000 tons of corn and 93,000 tons of dry beans, along with rice, wheat, and fruits and vegetables. Nontraditional agricultural exports have greatly increased in recent years; such products include: lychee, rambutan, melon, papaya, mango, pineapple, broccoli, okra, snow peas, celery, cauliflower, asparagus, garlic, spices and nuts, and ornamental plants. Guatemala's trade surplus in agricultural products was $488.4 million in 2001.

An agrarian reform law of 1952 provided for government expropriation of unused privately owned agricultural lands, with the exception of farms of 91 hectares (225 acres) or less and those up to 273 hectares (675 acres) if two-thirds of the acreage was under cultivation. By 1954/55, 24,836 hectares (61,371 acres) had been distributed to 10,359 farmers. The law of 1952 was supplemented by an agrarian reform law of 1956, which aimed to distribute state-owned farms (fincas nacionales) to landless peasants. From 1954 to 1962, the government distributed 17,346 land titles. In 1962, the National Agrarian Improvement Institute was created to provide assistance to the new landowners and to improve their living standards. The government requires plantation owners to set aside land for the raising of subsistence crops for their tenants. An agrarian credit bank provides loans to small farmers. Some of the land farmed by Amerindians is held in common by groups of families and is never sold.

Thanks for this! Guatemala is very fascinating! It helped me a lot on my essay too! Thanks!!:D
2
Shiylah

Great help!!! Thanks! it was amazing! Anyone needing Guatemala info, this is it!
3
Ingrid Medrano

The information is very helpful, but a little outdated. I was looking as well more information about fruits, and vegetables originally from Guatemala.
Thanks a lot!
4
baxter b.

i love guatemala this really helped mw with my project!
6
felesha

THANKS
THIS MADE ME GET A VERY HIGH RESULT FOR MY PROJECT!!
7
Zapiggypig

Thank you so much for this! i had such a hard time finding this info and this totally saved me! i really appriciate it. Thanks! My essay was perfect!
8
noa

needs more information about how the industries work.
11
o

Thank you guys so much this really helped me with my 4 page paper and 20 slide power point..
13
abc

Interested to know more about cocoa and banana plantation in Guatemala.
15
Aries

thank you for the good information! but i am doing a project in Spanish 1 on Guatemala and I am working on a pic collage on the agriculture and industry so if anyone has any ideas email me! : ajejarvis@switzsc.org
16
:)

This site helped me so much on my amigos project for school!
18
consuelo martinez

This page was good only I was whanting it to be more updated as my cuontry has changed. How ever it is good to read about it again.
19
Maria

thank you so much this was such a great help with my essay that is 350 words long.
20
Jas

Totally awesome, I got the highest score in my class thanks to you!
21
Teofilo

This helped me a lot on one of my school projects. I didn't get much time to work on it, so i used this website to research guatemala as my topic. THANK YOU! :D