Main sources of revenue are export and import duties, income tax, estate duties, and various internal rates, licenses, and taxes. The 1986 Fiscal Reform Program replaced a number of taxes, including a personal income tax, with a VAT of 20% on certain consumer goods. In 1999, the government decided to double its expenditures on infrastructure projects, including airport expansion, the creation of a new port, and road construction. 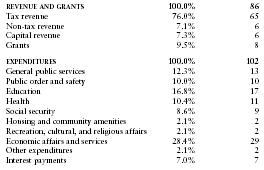