As of 2002 there were 1,986 km (1,234 mi) of paved highways and a total of 10,029 km (6,232 mi) in the road network. The Pan American Highway links El Salvador with Guatemala in the northwest and Honduras in the southeast. The Cuscatlán Bridge, where the Pan American Highway crosses the Lempa River, was the main thoroughfare for travel between eastern and western El Salvador at the time of its destruction by guerrillas in January 1984. In 2000, registered passenger vehicles numbered about 54,088, and commercial vehicles numbered 80,652.

El Salvador had 562 km (349 mi) of public-service railroad tracks in 2002. The major domestic rail lines are operated by the National Railway of El Salvador, which was formed in 1975 by a merger of the Railways of El Salvador and the US-owned International Railways of Central America. There are rail connections to Puerto Barrios, Guatemala, which, under an agreement with the government of Guatemala, provides El Salvador with a port on the Caribbean. Another line runs west from La Unión/Cutuco to the El Salvador Guatemala border, 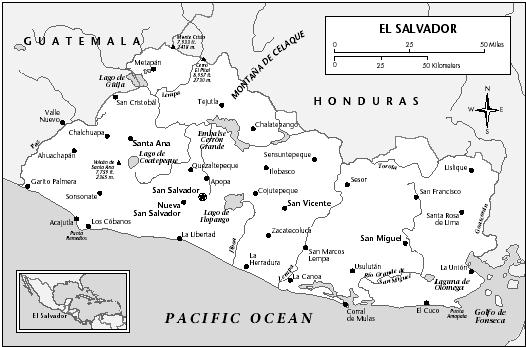 providing a rail link to Mexico. The entire rail system is narrow gauge and single track.

The country's three ports—La Unión/Cutuco, La Libertad, and Acajutla—are located on the Pacific coast. Acajutla is the only port in service at present, and it only receives bulk goods. Finished goods arrive at Guatamalan or Honduran ports and are trucked into El Salvador. In 2002, El Salvador had no registered cargo ships. Inland waterway traffic is negligible, with only the Rio Lempa partially navigable.

In 2001 there were an estimated 83 airports, only four of which had paved runways. El Salvador is linked with the entire Western Hemisphere, Europe, and the Far East through international air services provided by Transportes Aéreos Centroamericanos (TACA) and other transportation companies. The principal airport, El Salvador International, is near San Salvador. In 2001, 2,192,300 passengers were carried on scheduled domestic and international airline flights.

This article helped me understand the culture of El Salvador. I enjoyed learning about it. Thank you.