Most current public revenues come from taxes, fees, and fines. Municipal taxes and fees are subject to approval by the Ministry of the Interior. Until the early 1980s, government fiscal operations had generally shown surpluses; these enabled the government to sustain a growing volume of capital expenditures, resulting in a higher government share in total investments. Improved tax collection in 1998 resulted in approximately 56% of government revenues being attributed to the VAT. The use of the colón is being phased out; the economy will eventually be completely dollarized and the Central Bank dissolved by the end of 2003.

The US Central Intelligence Agency (CIA) estimates that in 2001 El Salvador's central government took in revenues of approximately $2.1 billion and had expenditures of $2.5 billion. Overall, the government registered a deficit of approximately $400 million. External debt totaled $4.9 billion. 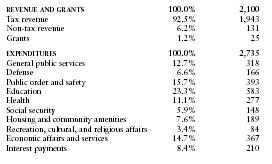