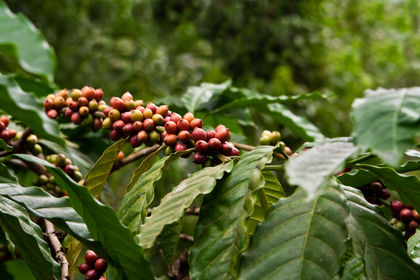 Coffee, El Salvador's major crop (30% of total agricultural output), is grown principally in the west and northwest at elevations of 460 to 1,520 m (1,500 to 5,000 ft). Primarily as a result of the civil war, coffee production declined in the 1980s. In June 1993, the Ministry of Economy certified the first shipment of organic coffee; the agrarian reform cooperative that produced the coffee had not used chemicals or pesticides for over four years. Production in 1999 amounted to 144,000 tons (down from 156,000 tons in 1990). Exports of coffee in 2001 amounted 92,130 tons, valued at to $131.5 million. The coffee industry is a major employer in El Salvador, generating about 82,000 jobs.

Sugar production fell between 1979 and 1981 but later recovered; cane production in 1999 was 5.5 million tons, and the sugar industry contributed $80.1 million to the country's foreign exchange earnings in 2001. Sugar is the most important agricultural product after coffee, and is grown mostly by independent producers. Investment has increased, as has the area under cultivation (in contrast to the other two major export crops). The world price has, however, been in decline for several years, and this decline has cut export earnings; the government secured a $30.4 million loan from Venezuela to divert some production to gasohol.

Traditional grains grown in El Salvador include white corn, sorghum, rice, and edible beans. These crops make up the fundamental diet for most Salvadorans and are produced on virtually all small farms. Production amounts in 1999 included corn, 684,000 tons; sorghum, 182,000 tons; rice, 60,000 tons; and beans, 72,000 tons. An additional 455,800 tons of corn were imported in 2001 to meet local demand.

Land that was originally planted for cotton is now being used for sugar cane, pasture, and nontraditional crops. El Salvador has steadily been shifting agricultural exports towards nontraditional items such as jalapeño peppers, marigold flowers, okra, and pineapples. Traditional coffee areas are also being absorbed by urbanization projects.

what are the major industries in el salvador? where are they located in this country and what are thier purposes?
2
Sandra

Please I need to know about the products and natural resources in El Salvador.
3
tony

I need to know What percentage of crops is exported?
4
Robert

When are these crops harvested? In which seasons?

this things have been helpful. so keep up the good work.
6
poop

57% of Central America's crops are exported into America.
7
Amelia

What are 10 CROP exports in El Salvador? HELP me I have a project that is due help help help
8
Chloe

What is the primary type of farming used in El Salvador?
9
Ash

what are the foods they sell? They never say what it is