The central government, 20 provincial and some 100 municipal governments, and a large number of decentralized autonomous agencies constitute the public sector of the Ecuadoran economy. Central government budgets in the late 1970s and early 1980s grew expansively from one year to the next, with oil being the key source of income. Economic reforms instituted in 1992 rose domestic fuel prices and utility rates, eliminated subsidies, and brought the government budget into balance. These changes helped eliminate the budget deficit by 1994. The government was able to maintain budgetary control in 1995 when faced with increased military expenditures because of the boarder conflict with Peru, with a deficit of only 1.4% of GDP. However, the 1996 balance ran a deficit of 3% due to increased public spending. A growing fiscal deficit in the late 1990s due to declining oil prices, El Nino damage, and the inefficiencies of the public sector, caused the removal of several political leaders. The extreme financial crisis during 1999 and 2000 caused the total public debt to rise from 64% of GDP in 1997 to 116% of GDP in 1999.

The US Central Intelligence Agency (CIA) estimates that in 2001 Ecuador's central government took in revenues of approximately $5.6 billion and had expenditures of $5.6 billion. External debt totaled $14 billion. 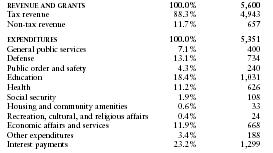