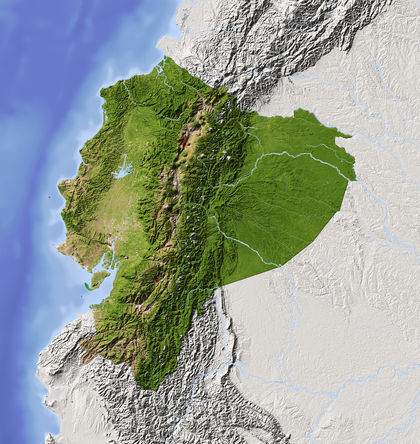 The Galápagos Islands, a province of Ecuador with an area totaling 8,010 sq km (3,093 sq mi), are approximately 1,130 km (700 mi) off the coast on the equator at 89° to 92° W . The total area of the republic and its territory is estimated at 283,560 sq km (109,483 sq mi). Comparatively, the area occupied by Ecuador is slightly smaller than the state of Nevada. Ecuador also claims about 200,000 sq km (77,000 sq mi) of land awarded to Peru under the 1942 Protocol of Rio de Janeiro. Armed hostilities flared along a still undemarcated stretch of the border in January 1981, but by 20 February, a 14-km (9-mi) demilitarized zone had been arranged along the disputed line. Official maps of Ecuador show the entire region as Ecuadoran territory. Ecuador's capital city, Quito, is located in the north central part of the country.

this is cool! I want to study about all the countries.
2
justine

i love this website because it really helped me out with my project so thank you very much.
3
KIARA

wow this helps alot. espescialy for my project. thanks nation sencylopidea for your help!
6
angela

this has helped me a lot on my project and really comes in handy!
9
kyra

this is a great website! i love it!it can give us so much information!;] even for school.! if you need anything then look it up here!
10
Casydai

My spanish project got a much better grade because of your information on Ecuador. Thanks for being so straightforward and clear in your presentation and facts.
11
shalini

its realy helping me a lot doing my business,i need lot of information i get all from here its wonderful.
12
justin

this website was really helpful! i will for sure, get an A on my project now!
15
rodneka

THIS WEBSITE IS REALLY COOL I CAN ALMOST SEARCH EVERYTHING ON IT.
16
Mi

Wow this was great!
It helped me with my Spanish project! Thanks so much!
~Mi
17
Allison

I really like this website it helped me on my ecuador project it gives u alot of great facts and gives a clear understanding.
18
Darwin R.

OMG! this helps me so much with my countries project thank you whoever wrote this
20
kelsye

OMG! this helps me so much with my countries project thank you whoever wrote this
21
Julia Beltran

OMG!!!thank you so much whoever created this website.It gave me all the information i needed to complete my Ecuador project i needed to do for world geography!!THANK YOU SOOO MUCH!
22
maxx

This website has helped me so much on my geography I give my thanks and best regards to the author. -Maxx
23
Joshua cox

This is awesome.i love this web site it helps me on my test
24
elie

Wow ! This website really helped me thanks ... for this i can even recieve an a on my project its just incredible.
25
Lindsay

awsome website it really helped me on my Ecuador project!
27
PRANKSTER MARIO

this is a great web site, my teacher is realy pleased about my grades going to a b+.
31
erika

I LOVE IT BECAUSE I HAD A PROJECT ON ECUADOR AND I GOT AN A+ SO...WOW ITS SPEAKS FOR ITSELF DON IT =)
32
Paola

Am very thankful with this page is very interest information and am pretty sure it gonna give an A++ thank so much i love this page is nice as shit !! :)
33
john

Very good information. Just one thing that needs to be updated, the dispute of territory with Peru ended in 1995. Now the Official map of Ecuador shows the same territory and borders than all the other maps of the world, including those of Peru.
35
Alfonso

This website helped me a lot! I am very thankful. Now I know the location on Ecuador. This will totally help me on my PowerPoint for my Geography class. :)
36
silvia stonia

THIS WEBSITE HELPED ME SO MUCH IN MY CLASSES! THANK YOU SO VERY MUCH!
37
tango

this website makes me want to learn more about Ecuador! omg! i was just getting a demerit because i didn't know anything about Ecuador! Now i do!
38
Random...

Thanks. This helped me learn more about my country where i'm from for my heritage project. Special thanks and have a great day.
39
alexa

this is a helpful website for my 12 page report on Ecuador in Spanish. :)
40
Niroshani

This is very useful website because it really helped me on my Ecuador project at the University.
41
Sophia

This website helped me a lot! I am very thankful. Now I know the location on Ecuador. This will totally help me on my PowerPoint for my Geography class. :)
42
Gideon Samuel

love this website cos it helped me in my publication. And I believe I will continue to have more information. thanks
43
Rama

this has helped a lot. It includes a lot of info. I will carry on to retrieve information.
44
aiden