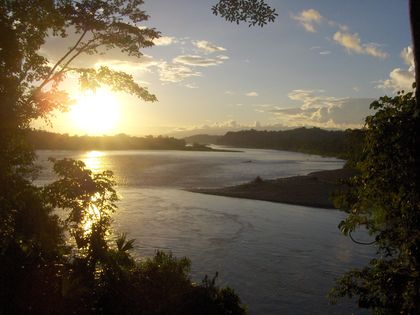 As of 2000, Ecuador's major environmental problems were erosion in the highland areas; deforestation, especially in the Oriente; and water pollution. The Ecuadoran Institute of Water Resources estimated that the amount of arid land increased by 31.5% between 1954 and 1979, when 7.5% of the coastal lowland and Sierra were classified as arid. Between 1981 and 1985, 340,000 hectares (840,000 acres) of land were deforested annually. By the 1990s, Ecuador had lost over 30% of the original mangrove area, which covered over 117,000 hectares.

As of 1994, it was estimated that, at current deforestation rates, coastal forests will be completely eliminated within 15 years and the Amazon forests will be gone within 40 years. Traditional farming practices have been blamed for most of these problems, but oil development has also played a role in the clearing of forests. A program for reforestation and maintenance of existing forests was initiated in 1979, but only 4,000 hectares (10,000 acres) were reforested annually during the early 1980s. Ecuador's principal environmental agency is the Ministry of Natural Resources and Energy. Land erosion is accelerated by deforestation.

Flooding and desertification are related problems which have damaged or eliminated valuable soil, particularly in the western coastal region. Water pollution is a problem due to the influx of domestic, industrial, and agricultural contaminants.

Ecuador's cities produce about 1.2 million tons of solid waste per year. The nation has 442 cu km of renewable water resources with 82% used for agricultural purposes. Some 90% of all urban dwellers and 75% of the rural population have access to pure drinking water.

The expansion of Ecuador's population centers threatens its wildlife. As of 2001, 28 species of mammals in a total of 302 are currently endangered. Fifty-three of 1,388 breeding bird species and 12 of 380 reptile species are also endangered. Of the 19,000–plus plant species in Ecuador, 642 are threatened with extinction. An extensive wildlife protection system was established in 1970. As of 2001, 42.6% of Ecuador's total land area was protected. Endangered species on the Ecuadoran mainland include the tundra peregrine falcon, yellow-tailed woolly monkey, five species of turtle (green sea, hawksbill, olive ridley, leatherback, and South American river), and three species of crocodile (spectacled caiman, black caiman, and American).

Endangered species in the Galápagos Islands include the dark-rumped petrel, Galápagos dark-rumped petrel (a subspecies), black petrel, African ass, two species of turtle (green sea and hawksbill), and the Galápagos giant tortoise and 11 of its subspecies. A subspecies of Galápagos giant tortoise is extinct, and another may be. Darwin's Galapagos mouse, the Fernandina Galapagos mouse, Charles Island tortoise, and the Duncan Island tortoise have become extinct.

Ecuador's natural attractions could lead to increased tourism, benefiting the economy. However, environmental problems, including further endangerment of native plants and animals, could be exacerbated without careful management of the areas attractive to tourists.

As an Ecuadorian and college student studying environmental sciences, this article concerns me. Why hasn't the government stepped up their game in doing something beneficial for once. It aggravates me that they don't appreciate the environment for what it is worth. So many species have suffered and who is paying attention? I would be willing to set up a group to help residents acknowledge what is happening and possible get them to change a few behaviors. Ugghhh!!! Who is going to stand up for this wrong doing?
2
Patricio

Erika, please don't stop and continue with your project. Don't forget that there are many individuals and groups with the same views as yours. Another thing, when thrown a lemon, make lemonade. In other words, the very same land that has been converted into desert could be utilized for the growth of arid type of flora, amongst other things. Good luck!
3
Stephanie A

I feel very strongly about the damage being done in Ecuador even though I have never been there or have any direct connection with South America in general. I am however going to be volunteering on an environmental conservation program with an NGO called International Student Volunteers. I really want to make a difference. Erika, part of my volunteering will involve talking to the local people about sustainability and conservation. You can check this out on IndieGoGo under environment, a campaign called Ecuador Volunteering project. People like myself are trying to stand up against all this, but I guess it will take a lot of effort!
4
jordan roche

I think that this is crazy and that there should be no reason to take away the environment of animals and such that were already there just for our greedy needs. As a senior in high school with years of studying animal life and effects of man onto them, this is something that can be stopped very easily...too bad that this had to happen.
5
Kai

I need this to find out an environmental problem with Ecuador, and this helped me out a lot. I wonder what happens when the people eat the contaminants? Never told me.
7
sandra megens

I think that the major problem of Ecuador on the issues to water security or environmental issues after the new constitution is to enforce what the law said about environmental conservation and nature rights. The protection of vulnerable areas should be a major concern not just for the central government but also for local authorities and last but not least the self Ecuadorian people as well. I have been working for many years to bring attention on this issues. However continuously changing on local authorities level not help this objective at all.
8
dioselina

Wow, this is just so insightful I am so grateful I came across this article. I will be using it for my book and I will make sure to dedicate this to you. Please text me if you would like a monetary compensation for your work. Sincerely
10
Timothy Mckinnon