The climate varies with the region. Most of the coast consists of wet, tropical forest, increasingly humid toward the north. The cold Humboldt Current (also called the Peruvian Current), which flows northward along the coast of Peru and then heads out into the Pacific off the coast of central Ecuador, limits the rainfall on a strip of the coast extending from as far north as the Bay of Caráquez and widening to include most of the coastal lowlands south of Guayaquil. In the Guayaquil area there are two seasons: a hot rainy period, lasting from January to May; and a cooler dry season, during the rest of the year, when sea breezes modify the equatorial heat. The tropical forests of the Oriente, east of the Andes, are more humid than the coast; there, temperatures are high, and rain falls all year round. 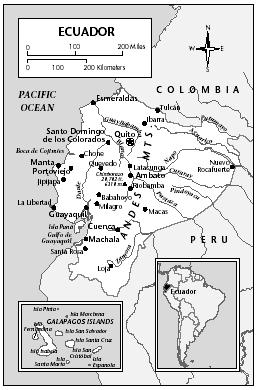 The climate of the central plateau is governed mainly by the altitude. The capital, Quito, at 2,850 m (9,350 ft), has perpetual spring, with an average temperature of 13° C (55° F ) and about 127 cm (50 in) of rainfall annually. The highlands are cut by numerous deep valleys, which bring subtropical climates to within a few miles of the more temperate areas. Cold and wind increase as the slopes surrounding the central plateau ascend to form the páramo , or highland meadow. The higher areas rise to peaks above 5,200 m (17,000 ft) that are perpetually covered with snow.