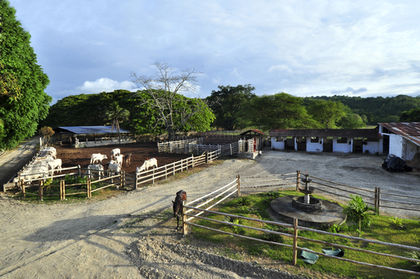 Although Ecuador's main economic activity has long been agriculture, only about 11% of the land is arable or under permanent crops, and another 18% is permanent pasture. Throughout the 1970s, agricultural development was neglected because of the emphasis on oil exploitation, and the sector showed negative rates of growth, declining by 5.4% in 1978,2.8% in 1979, and 2% in 1980. During 1985–90, however, agriculture (along with fishing and forestry) showed an average annual increase of 4.8%. Agricultural production had and average annual growth of 1.7% during 1990–2000. Agriculture employed 26.5% of the labor force in 1999 and contributed 11% to GDP in 2000.

The land census of 1974, which covered a much larger area than the previous census of 1954, showed that during the intervening period the number of agricultural units had grown by 172,810. This increase was the result of agrarian reform and colonization, initiated in 1964. Ceilings imposed on the maximum size of holdings ranged from 800 hectares (2,000 acres) of arable land plus 1,000 hectares (2,500 acres) for pasture in the Sierra region to 2,500 hectares (6,200 acres) plus 1,000 hectares (2,500 acres) of pasture in the coastal region. The 1975 plans of the Ecuadoran Land Reform and Colonization Institute called for the redistribution of 80,000 hectares (198,000 acres) of land in the coastal region.

Traditionally, agricultural products have included bananas, coffee, tea, rice, sugar, beans, corn, potatoes, and tropical fruit. Exported products of more recent prominence include roses and carnations, strawberries, melons, asparagus, heart of palm, and tomatoes. The major crops of the highlands are corn, barley, wheat, kidney beans, potatoes, horsebeans, peas, and soybeans, all for domestic consumption. Agriculture on the coast is largely oriented toward the export market. Increased acreage and improved yields, as well as the government's price-support program, have caused rapid growth in agriculture. Most of the cacao crop is produced on plantations of 60 hectares (150 acres) or larger, but the more important banana and coffee crops are grown mainly on small landholdings by independent farmers. Banana exports rose from less than 5% of total exports after World War II (1939–45) to 62.2% in 1958; in 1974, they were 10.8%, and in 2001, 17.8% ($828 million). Ecuador is the world's leading banana exporter, selling over 3.5 million tons abroad in 2001. Cacao became a valuable export in the mid-1970s, but low prices and declining harvests had a negative impact on revenues until the early 1980s, when they began to rise again. In 1978 and 1979, coffee brought high export earnings ($281.2 million and $263.1 million, respectively), but with lower world prices, coffee export earnings fell to $106 million in 1981, despite an increase in production. Revenues rose steadily during the 1980s, reaching $290 million in 1986, but fell to $75 million in 1992. Coffee revenues in 2001 amounted to $51 million.

The agricultural sector of the economy presents potential for further development and growth. Crops for domestic consumption, particularly rice, barley, maize, African palm, and potatoes, continue to show growth due to increased area planted and improved yields. Other segments likely to experience growth are nontraditional agricultural products such as flowers, fresh fruit, and vegetables, and processed foods. The government's agricultural policy focuses on integration into the World Trade Organization, import tariffs, and the lack of credit in the agricultural sector.

this was a great piece ofinformation because it helped my get alot of insite about Ecuador that I never knew before.
2
richard fraser

I have recently moved to Ecuador from the states and want to get involved in agriculture near Manta area. where could i get advice on cash crops help in farming practices etc. Oh yeh i dont speak much spanish.Thanks
3
gerald henke

Richard, this process of obtaining information is new to me, I am in New Mexico and am active in Agriculture, I too, would like to become informed about ag in Ecuador, would like to email with you on what you have found since arriving in Ecuador, especially the Manta area. Thanks gerald
4
don park

looking for chia seeds exporters, from usa. I want to visit chia seeds farming areas.
thank you for your e-mail.
5
Abdelwahed

I am looking for Palora Ecuadorian Yellow Dragon Fruit plants to buy and bring to South Africa - Can anyone please assist.
7
Simbarashe simpson

Hello guys my name is simpson l live in zimbabwe.l wish to relocate and work in ecaudor how best can l go about.thanks
8
Ratna reddy

I am Reddy from India can I get job in agriculture in Ecuador?
9
Danny Odato