Between 1968 and 1975, dependence on foreign loans and grants to finance the budget was substantially decreased, and by 1975 tax revenues amounted to about 12% of the GNP. In the late 1970s, this trend was reversed, with rising expenditures and increased assistance from abroad. Legislation was passed in 1997 to allow the privatization of state-owned enterprises, including public utilities, the country's largest bank, an insurance company, and a number of factories. The government receives almost one-third of its revenues from taxes on imports, but the increasing use of the free trade zones diminishes indirect tax returns.

The US Central Intelligence Agency (CIA) estimates that in 2001 the Dominican Republic's central government took in revenues of approximately $2.9 billion and had expenditures of $3.2 billion including capital expenditures of $1.1 billion. Overall, the government registered a deficit of approximately $300 million. External debt totaled $5.4 billion. 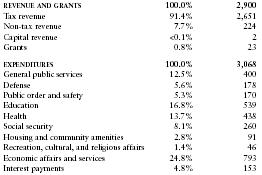