The eastern part of the island of Hispaniola was originally known as Quisqueya, meaning "mother of all lands." It was first settled by the nomadic and warlike Carib Amerindians and later by the agricultural and peace-loving Arawaks. Christopher Columbus made the European discovery of the island and claimed it for Spain in 1492. Santo Domingo, the oldest city in the New World, was founded four years later by Bartholomew Columbus, the explorer's brother. By 1517, Hispaniola had become the springboard for Spanish conquest of the Caribbean and of the American mainland. As with other Caribbean islands, the 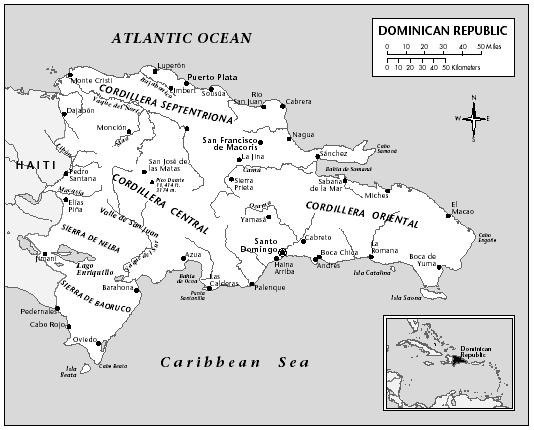 Amerindian population dwindled, and was replaced by African slaves.

Between 1844 and 1916, the new republic alternated among personalist leaders, who sought foreign protection against Haiti. The most prominent among these were Pedro Santana and Buenaventura Baez, who dominated Dominican politics until 1882. Santana restored the Dominican Republic to the Spanish Empire during 1861–65. Baez in 1869 negotiated a treaty providing for US annexation, but the US Senate refused to ratify it.

After a 17-year dictatorship, the Dominican Republic entered a turbulent period characterized by general political instability and increasing debt to US interests. In 1905, US president Theodore Roosevelt appointed an American receiver of Dominican customs, and a subsequent treaty provided for repayment of the debt. This first application of the "Roosevelt Corollary" to the Monroe Doctrine was followed in 1916 by the US establishment of a military government under Marine Capt. H. S. Knapp. It ruled the Dominican Republic until 12 July 1924, when sovereignty was restored. US customs control continued until 1941.

In 1930, Rafael Leonidas Trujillo Molina was elected president. For the next 31 years, he ruled the Dominican Republic either directly or indirectly. Trujillo had himself reelected in 1934, 1940, and 1947, then arranged for his brother to become president in 1952 and 1957, and then installed Joaquín Balaguer in 1960. Under Trujillo, the Dominican Republic achieved some economic progress, removing its foreign debt. But Trujillo brutally suppressed fundamental human rights. Only one party was allowed, the press was totally controlled, and constant purges weeded out all but his most servile supporters. His most dubious achievements were a result of his own megalomania. In the capital city of Santo Domingo, which he renamed Ciudad Trujillo (Trujillo City), there were 1,870 monuments to Trujillo, who gave himself the title "The Benefactor of the Fatherland." He also amassed a personal fortune estimated at $900–$1,500 million.

Trujillo was assassinated on 30 May 1961. In July 1961, the Balaguer cabinet resigned as street rioting broke out. The opposition agreed to an interim coalition government under Balaguer that September, with Rafael Trujillo, Jr., as head of the armed forces. In November, the United States sent warships just outside Dominican waters to prevent the armed forces chief and his two uncles from a staging a rumored coup. They went into exile immediately.

After rule by an interim Council of State, Juan Bosch of the Dominican Revolutionary Party was elected president in 1962. He assumed office in February 1963 but remained in power for only seven months, during which time very little of the promised social and economic reform could be accomplished. The military, which overthrew Bosch in September 1963, proceeded to install a three-man civilian junta, called the Triumvirate, which was in turn overthrown by the supporters of Juan Bosch in April 1965. With anarchy threatening—and, according to US allegations, Communists deeply involved in the pro-Bosch insurrection—the United States sent 23,000 troops into the Dominican Republic, ostensibly to protect the lives of US citizens. Within weeks, the OAS had set up an Inter-America Peace Force in the country. This controversial set of arrangements eventually brought order to the country. After the 1966 elections, all US and OAS troops left the island.

In the general elections of June 1966, Balaguer, returned from exile, campaigned vigorously throughout the country, while Bosch, his chief opponent, remained home, apparently fearful of an attempt on his life. Balaguer won with 57.2% of the vote. Four years later, Balaguer ran essentially without opposition, as most parties withdrew from the campaign in response to rising political violence.

Events in 1974 followed a similar pattern. Two days before the election, an opposition coalition announced their withdrawal from the contest. The opposition's principal candidate, Silvestre Antonio Guzmán Fernández of the PRD (Dominican Revolutionary Party), called for general abstention from the election, charging Balaguer with fraudulent practices. Only one candidate—Adm. Luis Homero Lajara Burgos, a former chief of police under Trujillo—remained in the race. The results gave Balaguer an overwhelming majority, with 924,779 votes to Lajara Burgos's 105,320.

Following the 1974 elections, the opposition coalition, an amalgam of widely divergent political elements, decided to disperse in anticipation of the 1978 campaign. Despite their lack of representation in the legislature and in municipal councils as a result of the election boycott, the major opposition parties, aided by a large degree of press freedom, remained active and vocal. In the 1978 elections, the main presidential candidates were Balaguer and the PRD's Guzmán. Guzmán won with a 158,000-vote plurality, and his party gained a majority in the Chamber of Deputies. Numerous other parties, including the newly legalized Dominican Communist Party, participated in the elections. A right-wing military attempt to prevent Guzmán from assuming office was foiled, partly because of US government pressure.

During Guzmán's term, political prisoners were freed, press censorship was practically abolished, and political parties engaged in open activity. At the same time, however, there were mounting economic difficulties, aggravated by two hurricanes in 1979, which together left 1,300 people dead, 500 missing, and 100,000 homeless. In May 1982, a left-wing PRD senator, Salvador Jorge Blanco, was elected president. On 4 July, six weeks before his term was due to expire, Guzmán committed suicide, after several close associates were accused of fraud. Power was transferred peacefully to Vice President Jacobo Majluta Azar, and, in August 1982, to Blanco.

Whatever plans President Blanco may have had were soon overtaken by the country's burgeoning foreign debt. Blanco turned to the IMF for assistance. The resultant restrictive economic policy raised production costs and reduced industrial output. A cut in the US sugar quota, as well as a generally low world price for the commodity, was a further blow to the economy.

In presidential elections held 16 May 1986, former president Joaquín Balaguer was returned to office with 857,942 votes (41.6%). Jacob Majluta Azar of the PRD took 814,716 votes (39.5%), and Juan Bosch of the PLD (Dominican Liberation Party) won 379,269 votes (18.4%). Balaguer embarked on an ambitious program of public works that created employment for nearly 100,000 people. But by 1988, inflation was on the rise, and the peso had become unstable. Nationwide strikes in 1989 suggested that the country was headed for further crisis.

In 1990, Balaguer stood for reelection, and won a narrow, hotly contested victory amid claims of fraud by the opposition. Officially, Balaguer received 35.7% of the vote to Juan Bosch's 34.4%. Balaguer was inaugurated, but immediately created controversy by suggesting a set of IMF-style liberal reforms. This brought national strikes in August and November of 1990, and demands for resignation. In the Chamber of Deputies, where Bosch's PLD held a plurality, Balaguer faced serious opposition.

The results of a large portion of the May 1994 presidential vote, won, once again, by Balaguer, were voided by the electoral board, and Balaguer agreed to shorten his term to two years, scheduling a new election for May 1996. In that contest, no candidate won a majority, but a second round of voting on 30 June produced a victory for Leonel Fernandez of the PLD, who took office in August.

Although economic reforms introduced in late 1994 helped improve growth and lower inflation, unemployment remained high, spurring substantial emigration to the United States and Puerto Rico. In March and June 1995, riots occurred in response to unauthorized increases in public transportation fares. During his four years in office, Fernández successfully privatized several state-owned enterprises and utilities. The economy expanded at an average of 5% annually, unemployment fell, and inflation was low. Fernández successfully fought government corruption and consolidated democratic institutions. In spite of his popularity, however, he was constitutionally prevented from seeking reelection in the polling scheduled for May 2000. PRSD's Rafael Hipólito Mejía won the May 2000 election after PLD's Danilo Medina withdrew from the runoff. Mejía had obtained 49.5% of the vote in the first round and was expected to easily defeat Medina in the runoff. Mejía took office promise to increase social spending but vowing to maintain the macroeconomic policies adopted by Fernández that helped that country become one of the fastest growing nations in Latin America in the late 1990s.

Who wrote this article? I want to cite is a resource. Can you