Nationalized railways connect the east and west extremities of the island by 4,807 km (4,808 mi) of standard-gauge track. In 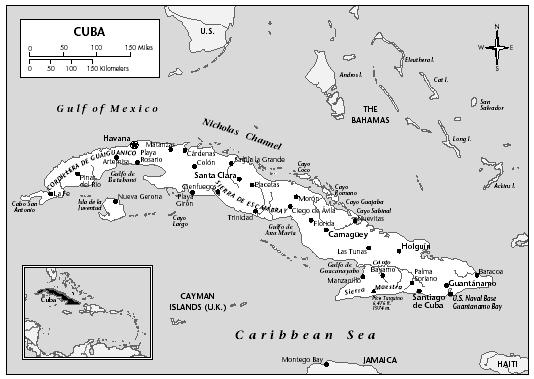 Cuba first began to develop a merchant marine under the revolutionary government. The USSR had supplied oceangoing vessels and fishing boats and, in the mid-1960s, built a huge fishing port in Havana Bay to service Cuban and Soviet vessels. By 2002, the Cuban merchant fleet had 14 vessels of at least 1,000 GRT, totaling 44,187 GRT. Cuba's major ports-Havana, Cienfuegos, Mariel, Santiago de Cuba, Nuevitas, and Matanzasare serviced mainly by ships of the former Soviet republics, with ships from Spain, the UK, and Eastern Europe making up the bulk of the remainder.

In 2001 there were an estimated 172 airports, 78 of which had paved runways. The principal airport is Jose Marti at Havana. There are daily flights between Havana and the major Cuban cities, and weekly flights to Spain, Mexico, Moscow, Prague, and Jamaica. Cubana Airlines is the national air carrier. The number of air passengers increased from 140,000 in 1960 to 1,117,000 in 1997. However, by 2001 passengers declined to 882,300. Between 1975 and 1980, airports at Havana and Camagüey were renovated, and new airports were built at Bayamo, Manzanillo, and Las Tunas.