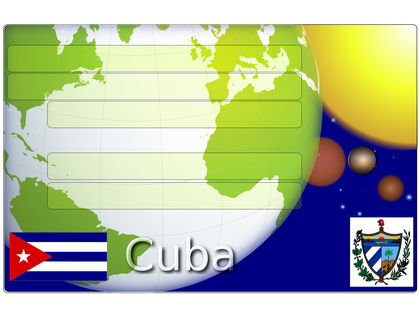 The Republic of Cuba consists of one large island and several small ones situated on the northern rim of the Caribbean Sea, about 160 km (100 mi) south of Florida. With an area of 110,860 sq km (42,803 sq mi), it extends 1,223 km (760 mi) E – W and about 89 km (55 mi) N – S . Cuba is the largest country in the Caribbean, accounting for more than one-half of West Indian land area. Comparatively, the area occupied by Cuba is slightly smaller than the state of Pennsylvania. It is separated from Florida by the Straits of Florida, from the Bahamas and Jamaica by various channels, from Haiti by the Windward Passage, and from Mexico by the Yucatán Channel and the Gulf of Mexico. Cuba's total coastline is 3,735 km (2,316 mi). The largest offshore island, the Isle of Youth (Isla de la Juventud), formerly known as the Isle of Pines (Isla de Pinos), lies southwest of the main island and has an area of 2,200 sq km (849 sq mi); the other islands have a combined area of 3,715 sq km (1,434 sq mi).

Cuba's capital city, Havana, is located on its north coast.

This was the only site that I could find that would tell me what state in the US Cuba is relevant to in size.
2
karanja njonjo

The article was very helpful to me in establishing the actual size of the whole of the Carribean.
3
adella adams

this information was very helpful for my spanish project. :)
4
cinda ward

i really like this site. it gives a lot of information. keep up the good work!! =]
5
ashfaq

Wow this really is helpful. Hopefully I do good on my spanish project. College professors are tough grders!! Gasp! :)
7
kayla damron

thanks for all the information!! hopefully I'll do really well on my report on cuba!!!
8
Odette

thanks for all this information ! i used it for my report on cuba ! :DDD
10
tyler shen

great site! really helped me with my project for school :P
12
PRD

Moreover, the island does not have an insular base, it floats, it also now has 20 provinces versus the only 6 it had back in '66 when I left.
13
SELENA

great site! really helped me with my project for school!
14
Luxury Jones

Thank god!this is the best information of all the websites I was looking for!
15
Jacob

Oh My God, thank you!! found all the information I need! =)
16
KESHAUN BARNES

Great info, searched Cuba sites, could not find, what I wanted, approx. length east to west and north to south, all the info I needed right up front on this site, excellent!
18
rocket

It was recently described in an article in the US press as a "tiny island." It is larger than Iceland and also larger than any Caribbean Island, which by my summation makes it the largest Island in the western Atlantic and within the Atlantic only surpassed by the UK/Ireland. It was a US propaganda piece so clearly "tiny" was used to slight Cuba.
20
Sarah R. Jones

My husband & I were discussing the Martin Cruz Smith novel, Havana Bay, and initially thought Cuba was a very small island. This information surprised us. Thank you for your help!
21
wow

WOW. This is an amazing text. I love how it is so short sweet and to the point. it saved a lot of time for me but I also learned a lot of things from it.