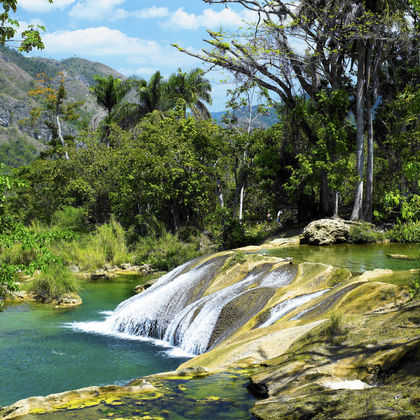 The Cuban government has formed several agencies to protect the environment. Among them are the National Parks Service, the National Commission of Environmental Protection and Rational Use of Natural Resources (1977), the National Environmental Education Program, the Academy of Sciences of Cuba, and the National Commission for the Protection of the Environment and for Conservation of Natural Resources. As of 2000, Cuba's most pressing environmental problems were deforestation and the preservation of its wildlife. The government has sponsored a successful reforestation program aimed at replacing forests that had gradually decreased to a total of 17% of the land area by the mid-1990s. Another major environmental problem is the pollution of Havana Bay. In 1994, Cuba had the seventh-largest mangrove area in the world. Altogether, 51% of the country's renewable water sources are used for agricultural purposes. About 95% of Cuba's city dwellers and 77% of its rural people have pure drinking water. In 1996 Cubans emitted 31.1 million metric tons of industrial carbon dioxide.

Endangered species in Cuba include the Cuban solenodon, four species of hutia (dwarf, Cabera's, large-eared, and little earth), two species of crocodile (American and Cuban), and the Cuban tree boa. In 2001, nine mammal species in a total of 31 were considered threatened. Thirteen bird species in a total of 137 were also threatened. Seven types of reptiles of 105 were endangered, along with 834 plant species out of a total of 6,000-plus. The ivory-billed woodpecker, Cuban red macaw, Caribbean monk seal, and Torre's cave rat have become extinct.

the information on this page (Cuba Environment) is great. im doing a report on Cuba and this helped aloat. im sorry that i dont have any information for this but thank you.
2
kim

VERY HELPFUL IN INTERNAL ASSESSMENT FOR SPANISH . HELPED ALOT IN MY RESEARCH ON CUBA
3
Sean K.

This information helped with my son's research project. Thanks.
4
Brandon

Appreciate it, helped with my Asian/ Latin American project.
5
Beth

Great info - I am representing Cuba at a youth conference simulating the UN. This is ideal for tomorrow's discussion on sustainability. Thanks!
6
Brook

I really liked the information on my site. It is really helping with a spanish project. Thank you!
9
Autumn

This info is a good help! Thanx for giving it to us to use on our projects1!
10
Hope

Thanks so much! I have a Social studies project due in just a few days that I decided to do at the last minute and this totally helped! Hopefully this information gets me an A+!!! But seriously this really helped!
11
John

I love it a lot, I'm doing a powerpoint and it's very helpful:)
13
lia