The central government budget is passed upon by the Legislative Assembly. Municipal budgets are of minor importance, and local government funds are mainly grants from the national government. The financial range of the public sector extends to a large number of publicly owned entities. Interest costs on the accumulated government debt consume a huge 16.8% of the government's revenues. Approximately 42% of the 2001 national budget was financed by public borrowing.

The US Central Intelligence Agency (CIA) estimates that in 2000 Costa Rica's central government took in revenues of approximately $1.9 billion and had expenditures of $2.4 billion. Overall, the government registered a deficit of approximately $440 million. External debt totaled $4.6 billion. 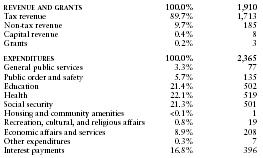