Much of Colombia's foreign debt has been accumulated by financing infrastructural rather than industrial projects, the latter being more common among Latin American nations during the 1970s and 1980s. Considerable sums were spent in the 1990s to stimulate the development of industry, and higher than normal military expenditures were necessitated by the continuing and disruptive guerrilla activity. The inflationary conditions that prevailed from 1961 into 2000 also stimulated government expenditures. For political reasons, the national government was unable to raise tax revenues sufficient to cover sharply expanding investment outlays. Loans from external financial agencies (including the IMF, IDB, and IBRD) were substantial, but insufficient to permit a buildup in the level of public investment operations. The recession of the early 1980s brought another round of deficits as spending increased far more rapidly than revenues. By the 1990s, reforms in the public sector had greatly improved the efficiency of public expenditures. 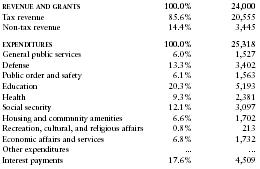