Telephone and telegraph networks link all provincial capitals and connect these centers with surrounding rural areas. Each local system is independent; most are municipally owned, but a few are in private hands. Long-distance service is provided by the national government and is based on an agreement among local and departmental systems. In the early 1980s, the National Telecommunications Enterprise (TELECOM) had one of the largest automatic telephone service networks in Latin America. Its high-capacity microwave system connected the 40 largest cities in the country. In 1997, over 5.4 million mainline telephones were in service. In 1998, an additional 1.8 million cellular phones were in use.

Most of the nation's 498 (463 AM, 35 FM) radio stations were privately owned in 1999. In 1997 there were 60 television stations. In 2000 there were 544 radios and 282 television sets for every 1,000 people. All television is owned and operated by the national government, but there are some commercial programs. Color television was introduced in 1979. Colombia launched its own communications satellite in 1985.

Almost every town publishes at least one daily newspaper. The press varies from the irregular, hand-printed newspapers of the small towns of the interior to such national dailies as El Tiempo, one of the most influential newspapers of the Spanish-speaking world. The country's principal newspapers and their 2002 daily circulations are as follows: 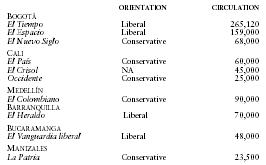 In general, the authorities are said to respect free speech and free press; most media are able to resist pressure from the government concerning sensitive issues, though censorship has been exercised occasionally in times of national emergency, and journalists exercise some self-censorship.