When President Carlos Lleras Restrepo took office in August 1966, the economy of Colombia was unstable; inflation was spiraling, and there was a lack of centralized economic planning. Lleras embarked on an austerity program that included trade and exchange controls, tight credit policies, tax reforms, a balanced budget, and the determination of priorities in the field of public investment. The cutback in imports had repercussions in the industrial sector, but controls were then loosened and business activity stepped up rapidly. Colombia succeeded in building up a national account surplus during the 1970s, 1980s and early 1990s. Emphasis on export expansion, import substitution, and continuation of foreign assistance led to further progress. The second half of the 1990s, though, brought a consistently negative balance of payments of about 5% of GDP. The Pastrana government implemented austerity measures through an IMF $2.7 billion loan in the hopes of cutting the fiscal deficit to 3.6% by 2000, and 1.5% by 2003. In 2000, Colombia had a trade surplus of $1.5 billion, in contrast with a $3.8 billion deficit in 1988. Recent rises in exports have focused on nontraditional exports such as bananas, flowers, gold, emeralds, chemical products, machinery, textiles and apparel, and plastic products. In 2000, due to lower international commodity prices for coffee and coal, those exports decreased.

The US Central Intelligence Agency (CIA) reports that in 2001 the purchasing power parity of Colombia's exports was $12.3 billion while imports totaled $12.7 billion resulting in a trade deficit of $399.9 million.

The International Monetary Fund (IMF) reports that in 2001 Colombia had exports of goods totaling $12.8 billion and imports totaling $12.3 billion. The services credit totaled $2.16 billion and debit $3.57 billion. The following table summarizes Colombia's balance of payments as reported by the IMF for 2001 in millions of US dollars. 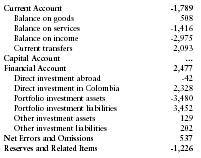