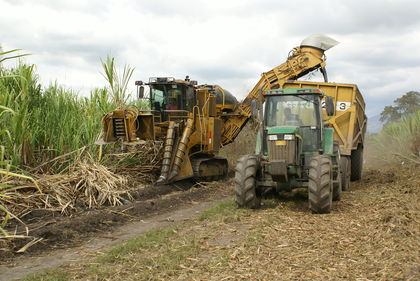 Agriculture, despite an endemic problem of poor productivity, remains the most important segment of the Colombian economy. In 2000, agriculture accounted for 14% of the GDP.

Only about 5% of Colombia's land area is cultivated, most of it in elevated regions of the temperate zone. The small area of cultivation is due in part to the rugged Andean terrain and in part to lack of irrigation. In 1996, irrigated districts covered only about 340,656 ha (841,761 acres), while private irrigation watered 710,000 ha (1,754,000 acres). The flat, fertile valleys are generally devoted to livestock, limiting cultivation to the slopes, an uneconomical practice that is gradually being changed. Hand cultivation, especially by machete and hoe, predominates, but mechanization is making headway on the larger farms. Fertilizer is expensive and not sufficiently used. The small size of farms is another constraint on agricultural growth: in the mid-1980s, farms of less than 20 hectares (50 acres) accounted for 80% of all agricultural land.

Sugar, also important, is grown chiefly in the Cauca Valley, with its center at Cali. Many varieties of bananas are grown; bananas for export are produced in the Uraba and Santa Maria regions. Colombia is the world's third-largest banana exporter (after Ecuador and Costa Rica) and supplies about one-sixth of the world export market. Corn, yucca, plantains, and, in high altitudes, potatoes have been traditional food staples since before the Spanish conquest. Beans, rice, and wheat, introduced in the 19th century, are also important in the diet. Other export crops include fresh-cut flowers, cotton, and tobacco. Cocoa is produced in limited amounts for domestic consumption. Colombia produces much of its domestic food requirements, but it has to import wheat, barley, fats, oils, and cocoa.

Since 1940, the government has taken an increasing part in the control, organization, and encouragement of agriculture. Through the Colombian Institute of Agrarian Reform (Instituto Colombiano de la Reforma Agraria—INCORA), farmers are given financial support, technical aid, and social assistance for better housing, education, and health facilities. INCORA acquires land for equitable distribution to farmers and helps to develop potentially valuable but uncultivated land and to increase agricultural productivity. The production-oriented Rural Development Program, begun in 1976, gave technical assistance and credit to about 30,000 small landholders. Farmers have also benefited from the US $150-million rural electrification program, introduced in 1981, and from a program to extend irrigation and drainage systems, initiated in the early 1980s.

Hello,
As per the article it is clear that Colombia has ver little cultivable land.
I want to know more about the cultivation of Cereals and Pulses, especially Rice. If it is possible, please provide me the statistical details of rice production and rice import by Colombia.
This will be a great help.
2
neil ferrans

Where does colombia produce cotton? and are there areas of lower than 500mm rainfall in the country?
3
JERRY

I HUMBLY WISH TO REQUEST FOR MORE EXPLANATIONS ON THE POLICIES OF EXPORTATIONS OF AGRICULTURAL PRODUCTS
I HAVE MORE INTEREST IN COLOMBIAN RICE
THANKS IN ANTICIPATIONS OF PROMPT REPLIES.
4
james